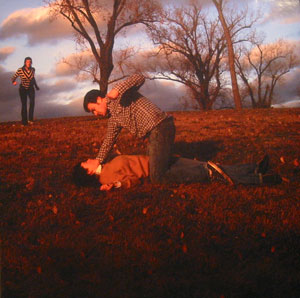 Thanks to an exaggerated tour recap from this trio in Tony Rettman’s recent 200 LB. UNDERGROUND micro-zine and friends in the right places, I was predisposed to checking out the cut of the MAGICK MARKERS’ jib. They struck me in the 'zine piece as “intellectually” something out of a mid-80s Forced Exposure, maybe a Suzy Rust feature on DRUNKS WITH GUNS or a phony Steve Albini tour diary. Musically that’s not too far off either. The Magick Markers perform a no-wavey drone of a somewhat formed nature, with female muttering moving in, out, under & above the racket. It murkily goes on this way track after track, including within the one that hits pain points very early in its endless 20 minutes. All live in the studio, or perhaps on a stage – no one’s clapping, that’s for sure. At no point is it particularly interesting, fresh, bold, creative or invigorating – nor is it especially distasteful one way or the other. It just is. What's the big deal? There are no sheets of white-hot godnoise, no unleashing of a brutal army of unholy guitar terrors, no perplexing, mind-bending, brain erasing musical skullduggery. There's a girl mumbling over some drone in a practice space. Far out. I have a hard time keeping away from the crusty curmudgeon role I’ve assigned myself vis-a-vis modern noise bands, but these kinds of records that go plop when I want & expect so much more just don’t pass the sniff test, no matter how cool or well-informed the players are. I expect that one day a lot of these young noise fiends will be binging & purging their youthful naivete via Jukebox Juries in whatever the 2018 version of the "blog" might be. Or are the Magick Markers a wild-ass rock and roll juggernaut built for the new generation? Piss off old man, the kids are taking over! Tell me.
posted by Jay H. at 7:58 AM