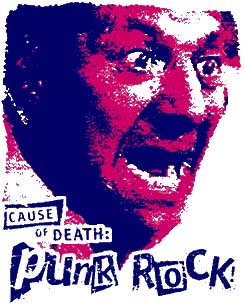 Long before "the year that punk broke", there was always a ton of pleasure to be derived from watching how the mainstream media skimmed the surface of the punk rock phenomenon, botched it up & spat it back for the hoi polloi. I was a rabid media hound from early on, still am, and I remember reading TIME MAGAZINE's initial depiction of punk rock in 1977, read in the safety of my parents' living room in Sacramento, CA. Thanks to MD alerting me to it; you too can read it right here. I was so taken by what I'd read at the time that I told everyone at school about the crazy spitting punks, particularly "The Dead Boys", whose name really knocked me for a loop. Some years later while in college, I actually burrowed deep into the microfilm room @ the college library just so I could devour this weak article again, such was its impact. (I also couldn't believe they had a picture of THE WEIRDOS, a band that virtually no one outside of California was talking up in the mid-80s). How about the roll call of nihilistic punk band names -- THUNDERTRAIN?!? (if you've heard that recent Gulcher CD by them, you'll have an even bigger laff). All in all, I guess this punk depiction isn't too uproarious -- it got worse, believe me.

Like the Kennedy assassination and 9/11, just about everyone remembers where they were the days the "punk rock" episodes of awful American prime time TV shows QUINCY and CHiPs aired. I saw the Quincy episode, "Next Stop Nowhere", the day it aired in 1982. It featured a FEAR-inspired band called "Mayhem" who were just godawful, but who rocked the fuck out when stacked next to CHiPs' horrible retard fake punk band "Pain" ("...I dig PAIN...."). Mayhem's hot signature tune went something along the lines of "I wanna see you CHOKE -- CHOKE!!!!". What caused the death of the kid at the start of the show? Why, punk rock of course. As this site recalls, "...Dancing to the sound of the Tommy Dorsey Orchestra, Quincy asks Dr. Emily Hanover why anyone would 'want to listen to music that makes you hate, when you can listen to music that makes you love'". Click the links and learn more -- you'll be glad you did.

Ridiculous as that one was, the CHiPs punk episode was off the charts incredible. This was one of the worst shows in American TV history to begin with, coinciding of course with a late 70s era in which preactically all my sister and I did Monday through Friday was watch 3 hours of prime time network TV. Thankfully by 1982 I was well onto other pursuits, therefore I missed the live airdate of this, and instead watched it stoned on a couch in college a few years later. You can read about it too all over the web, but the end, in which Erik Estrada gets the previously violent slam-dancing punks to mellow out & disco-dance to his version of Kool & The Gang's "Celebration", is, as they say, "priceless".

Finally, there were the talk shows of the early/mid 80s that featured distraught parents trying to understand their punker teenagers. I have seen a few of these Merv Griffin-esque shows that were pretty funny, but the one that I remember best was a Los Angeles-area show called "Hot Seat" , hosted by WALLY GEORGE. George was some Hollywood liberal's trumped-up idea of what a televised conservative should be -- an intolerant, ranting racist who hated homos and just about everyone else. It wasn't great comedy, but it featured a parade of buffoons who could barely read their lines & who did their best to make the scripted shennanigans sound like true pathos. One day George had a group called "Parents of Punkers" on, along with many of Orange County's finest mohawked punks and leather-clad skins. The weeping parents talked up the idea of military-style boot camp for their kids, the punks hissed, slammed to music at the breaks and started fake fights, while Wally George grunted and yelled about degeneracy and "the awful music, you can't even hear the words" etc. At the time all this stuff actually felt unfair to fans of punk -- so demeaning, "if only they asked some real punks" and all that (get out your old Flipsides and MRRs -- there were multiple letters along these lines about these shows). Now that the punks have won (!), punk broke, and great real punk bands like The Offspring & Green Day went to #1, well, we all had the last laugh, didn't we. Someone should revive this Austin, TX showing of all this stuff under one banner, pack it on a DVD and sell an assload of it. I've no doubt that the market is there. My Paypal account is ready.
posted by Jay H. at 8:17 AM