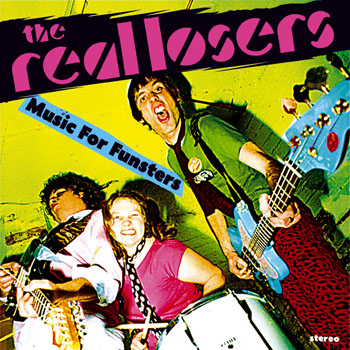 If you’ve heard any of the REAL LOSERS’ 45s or last year’s LP, you know what you’re in for on this one – circuit-blowing garage punk very much in the TEENGENERATE vein, and just as loud while not as good by half. In my humble opinion, or “IMHO” as they say on “the web”, they’ve only penned one shoot-out-the-lights song, and thankfully it’s included here: “My Rocket Radio”. It’s their poppiest thing, too, and maybe that’s the secret – instead of going for broke by cranking up the muck & the volume, add a monster set of hooks that cut through the clutter like this one does, and ride it for all it’s worth. “Birdbrain S.O.T.” is also fairly hot, with a pounding chukka-chukka guitar riff and tons of feral bashing courtesy of girl drummer “Hot Dog” (you go, Hot Dog!!!). The whole thing settles pretty well, and is certainly far better than most of their peers doing the same exact thing. And it’s from England – and for my money, it’s no better or worse than the far-more hyped UK garage punk act BLACK TIME (who are so derivative of their heroes they make the Real Losers come off like sonic trailblazers). I think the Real Losers are well worth keeping on the radar, but as far as actively following their literal progression, I think it’s safe to say you may have some waiting to do.
posted by Jay H. at 10:51 AM