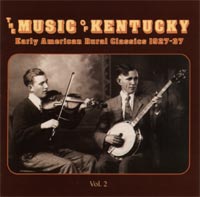 Yazoo Records weren’t content to rest on their considerable laurels after putting out two volumes of this incredible series of 1920s-30s Kentucky fiddle breakdowns, ballads and general strummin’ and pluckin’ – after this edition, they sat tight for a few years and put out a 7-disc set called "Kentucky Mountain Music" that, alas, won’t be reviewed here until I can get my paws on it for under $30. In the meantime, you cannot go wrong with purchasing “Music Of Kentucky, Volume 1” and this one. For some, this is holy grail American music, on par with the delta blues giants SKIP JAMES, CHARLEY PATTON and ROBERT JOHNSON. No compelling reason to argue here. Outside of the recently resurrected DOCK BOGGS and maybe UNCLE DAVE MACON, however, Kentucky Mountain Music doesn’t have its popularly-revered iconic giants the way pre-WWII blues does. That has to change. Not like I can do much to help, but let’s start with some of the stunners on this one. HAYES SHEPARD’s “Hard For To Love” and “The Peddler and His Wife” feature a nasal delivery straight out of “Kentucky cracker stereotypes 101”, as well as some mean banjo plucking. It has the immediacy and depth of Boggs’ stuff, and that ain’t easy. BASIL MAY’s “The Lady of Carlisle” takes what is probably a retelling of an olde country fable and turns it into a mournful, deep lament not dissimilar in feel from ROBERT WILKINS’ “Rolling Stone”. There are multiple wordless fiddle numbers, some just over a minute like LUTHER STRONG’s “The Hog Eyed Man” (isn’t “hog eye” a euphemism for a male dangler?) and “The Hog Went Through The Fence Yoke and All” (bummer). I haven’t read the liner notes for this, but I wonder if THE CARVER BOYS’ “I’m Anchored in Love Divine” is their take on the Carter Family’s classic, or vice-versa? And JOHN HAMMOND’s “Purty Polly” is a great read on a song that it appears just about everyone was singing around the depression era. That Polly must have been a foxy Kentucky dish. Some of Yazoo’s comps have a cobbled-together feel, like they tacked 3-4 songs of filler between each killer. Not so here – Volume 2, like the first one, is almost all prime cuts from a fertile soil & era that I’m hoping continues to grow in stature in these post-“O Brother” times.
posted by Jay H. at 7:48 AM