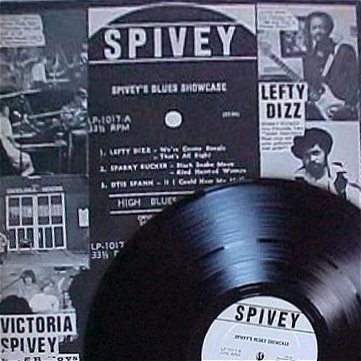 This was put into my hands by someone who very likely knew what distaste I have for most electric guitar blues, but who knew that I'd be healed by its power & glory in no time. And the man was right! "We're Gonna Boogie" is about two steps to the left of being legitimate, so best of luck trying to find it on the web, though these guys made some noise about having it in stock (my sources tell me Crypt may be involved as well). My beef with most of the Chicago- and Texas-based blues of the 1950s-70s, HOUND DOG TAYLOR & a few of his acolytes excepted, is just how redundant it all got so quickly. If one guy played with greater flourishes than his pal one juke joint over, you could expect to subtract all points due to his ham-handed "party" guitar chops, fake "lawdy I'm so tired" BS or awful cromagnon lyrics. Shakin' your boogie, dustin' your broom, mojo workin', etc. -- who among us can stomach cliche after cliche with a straight face, and swallow whole the mediocrity of the party circuit that engulfed the blues genre during Eisenhower's time? R. Crumb is with me on this one, folks. For what it's worth.

In any event, there were obviously exceptions, and this CD has me on the prowl for more. It kicks off in grandiloquent, ass-kicking style with the two meatiest tracks on here, screamers by LEFTY DIZZ ("We're Gonna Boogie") and JOHN LITTLE JOHN (yes, "Shake Your Money Maker", but believe you me when I tell you it's as wild and raw as anything you'll hear this year). Just acres of guitar and distorted squall on both. You can hear at least part of the LEFTY DIZZ track here. The collection settles into B+ to B- territory after those two, but whomever selected the tracks did so with an eye to the uglier and deep-underground side of modern blues, the sort favored by fans of the Fat Possum label in recent years. High marks go to ditties by MODEL T. SLIM and WILLIE WILLIAMS ("Wine Head Woman"). In fact the Fat Possum crew ought to take this CD and give it a properly-distributed reissue treatment, all the while helping clueless doubters like me to quell prejudices that stem from seeing too many bands of the BLUESHAMMER ilk in college & in beachside bars.
posted by Jay H. at 9:04 AM