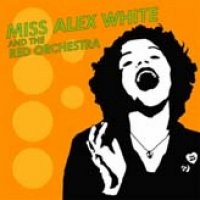 I thought this might be a solid platter, given how pleasing Miss White’s former band the HOT MACHINES were last year on their only 45 & how In The Red, one of my country’s finest labels for a decade and a half now, gave her instant cred vis-à-vis a starring slot on the label for her full-length debut. But it’s better than that – way better. I hear swaths and glimpses of underrated female-fronted punk bands of the first & second waves, most particularly Dee Dee Troit and UXA (famously heard on the infamous and mandatory 1979 “Tooth and Nail” compilation), or Kat Arthur and LEGAL WEAPON (an OK band with a couple of melodic slayers like “Pow Pow” and “The Equalizer”). If it were just about paying tribute, though, there wouldn’t be much to talk about, and there most certainly is. Miss White’s fond of booming, Spector-esque hooks, handclaps, swampy blues of a SCIENTISTS bent, and a set of vocal styles that ranges from girlish to gothy. And there are no ballads. It’s a simple but powerful brew, and the “Red Orchestra” are an exceptional “backing band”. One track in particular, “Cut In 3 Parts”, is so outstanding I’m going to include it on every CD-R sampler I make from now until maybe 2009. It might even get played a couple times at my annual Yom Kippur beer bash. If you’re downloading, you need to hear “Don’t Turn Me Up” and “Picture My Face” as well, but in truth, you need to hear them all. Like the TIME FLYS record, this is something that begs for instant repeat play as soon as it’s over (which is quickly). Alex White comes from and resides within the modern 21st Century garage milieu, sure, but you can just see she’s going places fast that most of her older peers won’t.
posted by Jay H. at 7:43 AM