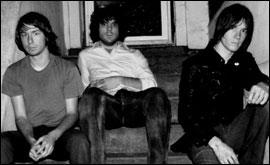 I have been chomping at the bit to see the MODEY LEMON for a couple years now, and -- well, before we get to them, let's talk about THE CUTS. The Cuts have 1979 Sire Records power pop/rock down to a science, from their outre-Madam Wong's clothes to the chooglin' keyboards to the Quick/Fast/Speedies/Jets/Sharks/Knack etc. retro-spew they were offering up. I suppose that's not all entirely fair; there were defintely times when I really enjoyed their more MOTT THE HOOPLE moments, and in general, they're a band with a master plan who most certainly can. It wasn't all power pop, either. And here I was thinking they were broken up 'cuz the main fella's also pulling time in THE TIME FLYS, only one of my favorite bands going right about now. Hey, my leg might've jittered during their set, I'm not gonna lie to you. But when they made way for MODEY LEMON, jesus christ, clear the room. The Lemon were even better and far louder than I'd expected, and though I haven't yet had the benefit of hearing their brand new one "The Curious City", you can sleep well tonight knowing it's gonna be right fucking on. The band started the evening by unfurling a huge Pittsburgh city flag, and it got me thinking how majorly stoked these guys have got to be to see both Lemieux and Sidney Crosby hitting the ice at the same time this year. I mean, that's just awesome, but then, so was the band when they rode out a long, feedback-snarled lead for a minute or more. The drummer, wow, he'll never be accused of "tippy-tapping", that's for sure, and what made this performance work was how weird, frizzled electronics kind of spurted out from time to time amidst the racket, almost as an afterthought really, except they knew full-stop what they were doing. The Modey Lemon are a mighty road-tested rock and roll machine; I figured they would be going in (every time I look at their site they're bombing around the globe on tour somewhere), but now I can speak of it with some informed truth. See this band & ye too shall know of their power.
posted by Jay H. at 7:41 AM