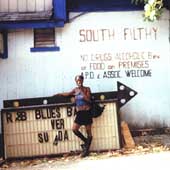 We got an email from SOUTH FILTHY member Walter Daniels a few weeks ago suggesting that we might take a gander at his band, and with a little research, I decided that would be a fine idea. See, South Filthy contains JEFF EVANS among its members, and that usually means that some top-flite backporch ramblin’ & jivin’ is going to be going down. With the former "Jack Oblivian" also in tow, you might call this act a "turdbucket-rock supergroup". The band actually recorded & released this one way back in ye olden times -- 2002 -- and somehow I just flat-out missed it. The record takes many turns from track to track, always settled around the greasy axis of ramshackle blues, cornpone country balladry and straight-up 50s rockabilly. Horns, saxes, organs, and harmonicas are in force like nobody’s business, and it all appears to be recorded straight to mic in a woodshed. If I didn’t know better, I’d swear that there were at least 6-7 vocalists swapping turns on the record’s 13 tracks, too, but a couple of times it’s just Jeff singing without the yuckster accent he’s made a trademark over the years. His “Sandra Lynn’s Blues” might just be the saddest song of the millennium so far, so if you GIBSON BROS and ’68 COMEBACK fans thought ‘ol Jeff had locked into that persona, well, you’re in for a tearjerking surprise. The gargantuan run-through of HOWLIN' WOLF's “Somebody’s In My Home” is an excellent, raw and scuzzy blues hopper, too, showing that this act has got more than a few cards to play and play extremely well. “You Can Name It Yo’ Mammy If You Wanna...” is their Southern jubilee celebration to the Dixie that has schooled and which surrounds them. Great stuff!
posted by Jay H. at 6:57 AM