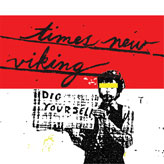 In the crazy world of fonts, Times New Roman represents the tried and true, the default "I-expected-as-much" way it's always been done. Viking, on the other hand, while deceptively appearing a little "olde english", represents something a little more bent & deliberately retarded, a shifty font that just might sneak up on you & win your shriveled heart if you're not on guard. The there's this new band TIMES NEW VIKING. “The way it sounds,” drummer and vocalist Adam Elliott explains in this Columbus Alive article, “it’s the idea of creating a drudgy dark sound while singing pop songs....". Well Mr. Elliott, that really is the way it sounds, except way more frantic and maxed-out than you're giving it credit for. Take some of the more cacophonous moments during "Sister Ray" -- maybe about 1/3rd of the way in, when it's still a rock song, and liberally shmear it over a sputtering quarter-inch tape full of very raw male/female organ grinder pop. That just might sound like Columbus, OH's Times New Viking. Wouldn't you know it, our friend MIKE REP dipped his calloused but healing hands all over this thing, and made it even more ruff-n-bleeding than it might otherwise have sounded. Who knows if the band are better for it, but it sure didn't hurt. The band do a superlative job trading off shouted vocals and caking everything in a warn glow of fine crud, yet it's almost as pretty and friendly as THE MATES OF STATE or something -- but far better. Pick of the litter is the the sing-along "Not High", ostensibly about a trip to Amsterdam & with lyrics so abstract I can't figure out if they're praising the martyr Theo van Gogh & my heroine Ayaan Hirsi Ali, or just barking about all the righteous pot they didn't smoke. No matter how you cut it, it's plump and juicy and full of life. A really, really great debut, and one that's been captured by a revitalized Siltbreeze Records.
posted by Jay H. at 7:08 AM