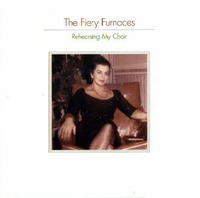 I attempted some ominous and self-preserving foreshadowing when I reviewed the FIERY FURNACES' singles collection a couple of months ago, as an ill wind was blowing in from Brooklyn that promised some bitter gruel in the form of what all parties are now bitterly calling "the grandma album". Yes, I too was frightened by the concept and knuckleheaded audacity of the Freidbergers' grandmother singing lead on the band's new album, but the results are far worse than I expected -- and it's not even Grandma's fault. Poor Grandma, wanting to support her progeny and their chosen career path in alternative music, forced to give voice to all her old-time stories of relationships & family quarrels & her mundane travels throughout Chicago, all so the kids can giggle and titter about their bold creative masterstroke. You might ultimately get used to the old woman’s voice – which is definitely not a “singing” voice – but you’ll never, ever forgive the band for foisting it on you.

Meanwhile, the Fiery Furnaces, once a rock band, have quickly devolved into pure tin pan alley schtick, full of waltzing pianos, burbling techno nonsense and straight-up 42nd-and-Broadway blather right out of “The Fantasticks” or “Annie Get Your Gun”. You might have previously hated how their songs often stopped on a dime and became something completely different, a tactic they employed on the excellent “Blueberry Boat” to strong effect. Here it’s just going-through-the-motions idiocy, a method delivered on every track just because that’s the way they do things now, not because it sounds good or results in a killer song. Eleanor Freidberger, she of the deep and playful voice I happily compared to PATTI SMITH not 18 months ago, now annoys every time she speak-sings her lines on this one. Maybe it’s because the band insists on throwing out tons of vague arcana about their former hometown of Chicago in every other breath, which is something that’s ill-making even when a San Francisco band does the same about the neighborhoods I love. Or maybe it’s because Eleanor decided that instead of being a rock and roll singer, the one who blew me away on their debut “Gallowsbird’s Bark”, she’d rather be some nonsense-spouting weirdo gadfly instead. Or one who makes Grandma do the same.

Look, I hate to summarily eviscerate a band that I’ve been holding up as a shining example for others to follow, but “Rehearsing My Choir” is an abomination. Worse, I’m fairly certain that the band knows this. My guess is that the Freidbergers wanted to cleverly make the recorded equivalent of a "Midnight Movie", something that would garner a cult-ish following from dare-to-be-different alternajerks -- but uh oh, they made a steaming pile of crap instead! Unless they come back shortly with a record nearly the equal of their first two, which is unlikely, I think that this month of bad reviews and unsold CDs will be the last month in which the Fiery Furnaces receive any significant attention.
posted by Jay H. at 7:46 AM