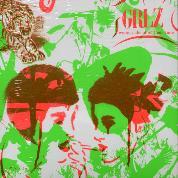 As our president is alleged to have said, "Fool me once shame on...shame on you...eh…um…a fooled man can't get fooled again." I, however, have been the fooled man twice now, first when I purchased the mediocre 2002 Soul Jazz post-punk disco-dance compilation “In The Beginning There Was Rhythm” and then again with this one, “GRLZ”, which is an even more bland set of female-led dancefloor 1979-81 funk/pop tunes. I’ve got no quarrel with dance music per se, given that music is employed the world over to help the common man and woman shake their collective rump. In Thatcher-era Britain, many a pasty white rump was engaged by punk-influenced bands who morphed into self-styled “mutant funk” bands when the booty call came from the clubs. Some of them were even pretty good, such as the DELTA 5, PIGBAG (who doesn’t love “Papa’s Got A Brand New Pigbag”, right?), MAXIMUM JOY, early SIMPLE MINDS (“Cacophony”! “The American”!) and the newly-funky GANG OF FOUR circa 1981. But with the likes of BOW WOW WOW and some mershy atrocities like JAJAJA and RIP, RIG & PANIC (name taken from a great ROLAND KIRK LP) clogging up the proceedings – and with the CD only going 12 short tracks in any event – “GRLZ” is a wide miss by just about anyone’s standards. Their label, Crippled Dick Hot Wax, had a couple of winning Italian porn soundtrack comps a few years back, but their first entry into quote-unquote post-punk will neither leave you hungry for more nor satiated in any way, unless you’ve never heard Delta 5 or Maximum Joy and want to ingest two of their best tracks & ignore the rest.
posted by Jay H. at 8:32 AM