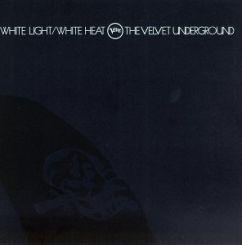 For years my favorite Velvets LP (and Top 5 record of all time) has been the first one, though I went through about a 6-month stint proclaiming that the 3rd record was truly their masterpiece. But as you surely know, all four were masterpieces in their way, even the less-than-perfect-but-almost “Loaded”. I felt like I hadn’t busted out “White Light/White Heat”, the first one that I bought way back in high school, in a while, so I gave it a couple of eardrum-shattering spins at tip-top volume & took some good notes. Here are 10 amazing things about this off-the-charts incredible, life-changing record, which can be your favorite with no qualms from me:

1. The jarring surprise I get every time I hear Reed shout “Sweetly!!” smack in the middle of a “Lady Godiva’s Operation” verse. It’s so incredibly out of place, and the rest of song so lulling, that it quickens my pulse for a frightening half-step every time
2. The first four minutes of “Sister Ray” – perfection
3. The fact that the first verse of “Sister Ray” starts right after the music does, and rushes quickly to a second verse. You’d have no idea, hearing this at a bar or something, that the song continues on for nearly 18 blissful and difficult minutes
4. The ridiculously great faux black man/jive talker voice used by Lou Reed throughout the title track
5. The serenity and peacefulness of “Here She Comes Now” at the end of Side 1, an extremely brief oasis of calm before the continuing storm
6. Turning the balance knob on the stereo fully to the right during “The Gift” so that all you hear is the fuzzy, squalling instrumental music track
7. The vocal harmonies in “I Heard Her Call My Name”, which hint at normalcy when the song that surrounds them is evil personified
8. The motoring chug of the riff that underlies “I Heard Her Call My Name”, which has become one of several de rigeur “Velvets” riffs that bands have been apeing for nearly 40 years now (!)
9. The legendary guitar “solo” that follows the legendary phrase “…And then my mind split open…” on “I Heard Her Call My Name” – sweet jesus, what a glorious mess!
10. Deeply pondering the overall sonic attack and distortion caked all over the record combined with its chaotic, transgressive subject matter (drugs, botched surgeries, murder, gay sex, transvestitism), and then pondering additionally how this must have hit the rock community of fans & critics in 1967, even after the sweetly-wrapped slug punch of the “The Velvet Underground and Nico”. I need to read that Clinton Heylin book one of these days to find out.
posted by Jay H. at 11:29 AM