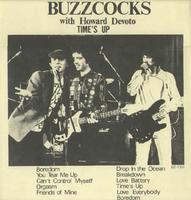 There was this guy Chris Nevis who I went to college with in the 80s & who DJed at KCSB-FM Santa Barbara the same time I did. He got into and out of punk rock in world record time, one day announcing out of the blue that he was immediately selling off his excellent record collection that he’d built up only within the previous 2 years. I don’t even think a girlfriend was involved. He let them go at fire sale prices, and that’s where I picked up this album, the first non-CRAMPS bootleg I ever owned. My copy of “Time’s Up”, unlike the one pictured here, has a black cover, but the photo is still the same. Some people think this is one of the greatest punk records of all time, and I am very sympathetic to the argument – it’s certainly my favorite BUZZCOCKS record of all time, though I’ve got no problem with the three official ones that followed it, despite not having listened to them in a coon’s age. “Time’s Up” features the original line-up the recorded the “Spiral Scratch” EP, one of the first 5-10 “punk” records as popularly defined, most notably the vocalist Howard Devoto. You think Pete Shelley had an unusual voice; where his falsetto was jarring enough, Devoto’s slurred slush approximates a developmentally delayed individual attempting to do tricks with vocal modulation. It’s great.

Beyond the top early versions of early hits like “Boredom” and “Orgasm Addict”, the real pleasures are found in two hard-charging, completely unreleased tracks that are as smoking as those from any KBD perennial: “Time’s Up” and “A Drop In The Ocean”. These are both slashing, echoey killers that are super tough, & that belie the general pop, harmony-laden trend the Buzzcocks followed on almost everything that followed this session. The band even tackles a BEEFHEART cover (“I Love You You Big Dummy”) and the TROGGS’ “I Can’t Control Myself” (still love the original line in this song – “Your slacks are low and your hips are showing”. Your slacks!). The band is young and hungry and intent on coming off as snotty as possible, which makes for fine listening. No need to hunt down the LP nor raid someone’s collection; it’s easily obtainable on CD here and here as well.
posted by Jay H. at 8:25 AM