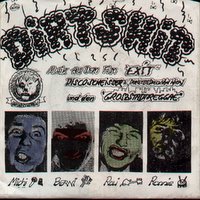 A prime piece of power no-fidelity death scuzz from 1979 Austria -- the land of composers, cobblestones and alps -- and of yeah, of the legendary DIRT SHIT. This 5-song 45 appears to have been their only record, and it's dripping with anger and bile, a total fuzzfest the likes of which I've heard only from KRIMINELLA GITARRER (more on them in an upcoming post) and the MENTALLY ILL from this era. The five tracks are Groszstadtreggae/Discoscheisser/Exit/Der letzte Dreck von Wien, and the two that blow doors off of just about anything else are "Exit" and "Discoscheisser", which are full force stop-n-starters with barked vocals and an insane level of grimy crud that gurgles over the proceedings with bitterness and spite. There's also demented, ham-handed nearly-militaristic percussion involved, and if there's one thing that made for uneasy listening 34 short years after WWII, it was angry, barked German over militaristic percussion.

There's not much available on these lads on the 21st century idiot box, and what I did find here was in Spanish. So, using one of the online free Spanish-to-English translators, I learned perhaps a little more:

"Today, at last, it has fallen in my hands some of the most desired disks and expected by my menda. I speak of the single of DIRT SHIT: "Rattenloch EP“. Neither that to say has that this that have among my hands is a reprint, invoiced by the seal Frontcore, of the original one appeared in 1979 by the seal Ratt Records. In their moment, only 200 people had the opportunity of oírlo and to see it in direct. Now, thanks to this reprint there are other 666 people more than can have the happiness of their life if they hit upon a copy. As you will understand its price in ebay, if is that in some moment appeared the head an original edition, was prohibitive. Now, thanks to this reprint, for some 5, 6 or 7 euro can have it in its house. And créanme you if I tell them that some people have had the opportunity to be done with a copy and, I suppose that by ignorance, they have left to pass the occasion. I-N-C-R-E-I-B-L-E."

I couldn't agree more lustily. Ladies and gentlemen, I only hope you have "the opportunity of oirlo and to see it in direct" the way this fellow has -- DIRT SHIT 4-ever!
posted by Jay H. at 7:28 AM