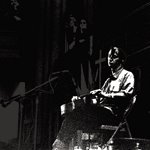 When JOHN FAHEY stepped onto the stage at San Francisco's Matrix club in 1968, I think it's fair to say that that could have been the very moment when he was at the absolute peak of his game. His very best LPs - the Blind Joe Death volumes, "The Great San Bernadino Birthday Party", "The Yellow Princess" etc. -- were just immediately behind him, and though he still had a couple of classics to come ("America" and "Of Rivers and Religion"), he was at this point fully locked into the five-handed guitar instrumental virtuoso he'd make an unfortunate habit of disparaging in his later years. This Matrix show is less an additive eye-opener for what Fahey's live act was like -- it was a lot like his studio act, with some bonus mumbled repartee between songs -- and more a wowser of a record in its own right. Taking some his absolute tip-top classics and splaying them out onto the stage with a lap steel and the odd slide, Fahey takes his ringing, intricately constructed acoustic songs and transports them in real time to someplace warm, lovely and complex. His reverance for the deepest of the deep country blues shines through in the odd squeaks and moans that emit from his guitar, dextrous sounds that only other giants like SKIP JAMES or CHARLEY PATTON or MISSISSIPPI JOHN HURT were able to pull up from the depths of their experience. This CD's got plenty to recommend it, and despite its overlap with so much of the 1966-68 studio material, I hope you make the wise call and add it to your collection anyway. Fahey was a legend, and a guy who was cut from a totally different cloth than just about any other guitarist alive or dead.
posted by Jay H. at 9:19 AM