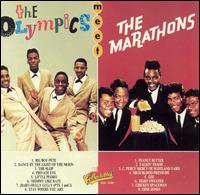 This thing's a total no-count dance party from beginning to close, exactly what I'd hoped for when I laid down the $5.99 it took to secure it. I knew THE OLYMPICS from some of their hot & honking late 50s R&B/doo-wop like "Big Chief Little Puss" (a pre-PC masterpiece, complete with Indian war whoops & uncouth wigwam jokes), and was certain I needed more. This fills the bill & then some, with all sorts of COASTERS-like hijinks and greasy, up-tempo shuffling on tracks like "Big Boy Pete" and "Private Eye". Top shelf rompers that will beget further Olympics research at our headquarters. There was some overlap between these guys and THE MARATHONS in both personnel & song selection, confused even more so by the fact that The Marathons also overlap with a group called THE VIBRATIONS. If you believe what you read on the internet, and of course I always do, the bulk of the tracks here are from a bogus Marathons who were put together by the Arvee label to cash in on the success of the R&B novelty raver "Peanut Butter". You might know them better by the track "Talkin' Trash" that kicks off the LP comp of the same name, the same Crypt-financed compilation from around 1991 that I'd peg as the single keystone record that got me into this wild sound in the first place. Of course, that one's credited to "The Olympics", so who the debil knows just what was going on with these inbred cats. A better $4.98 (the going rate at Oldies.com) you will not spend in a fortnight, so go to it!
posted by Jay H. at 8:41 AM