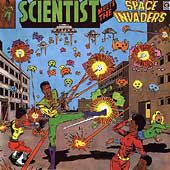 With backing band THE ROOTS RADICS behind him, the dub hero SCIENTIST usually had all he needed to combine extreme mixing board experimentation with bottom-heavy, low-end dark groove. This record is exactly what I go hunting for when looking into the nooks and crannies of 70s-80s Jamaican dub. It is sparse, mysterious and full of bizarre crashes & clanks, in keeping with the outer space theme. This 1981 disc obviously arrived hot on the heels of the Space Invaders craze, and titles like “Laser Attack” and “Super Nova Explosion” are given voice to by a wild array of fizzling effects. One of the things I love about Scientist’s approach was how he downplayed the reggae vocals, almost completely erasing them full-stop, except when it made sense to bring a word or a line back like some multiphonic, echo-laden bad dream. On the best tracks it sounds like he’s taken the bass and re-recorded it into 24 different tracks, and then inserted some weird micro-second delay onto each of those tracks to give this massive, cocooning sound. “Scientist Meets The Space Invaders” is even murkier and heavier than my other favorites from the man, so with that in mind, I’ll keep on plundering his back catalog – there appear to be untold dub riches the deeper I dig. It’s truly among the best dub ever waxed, so if you’re looking for a handful of discs to start your foray into this sound with, by all means please consider this one – it’s widely in print and sitting in the bins of your finer record establishments.
posted by Jay H. at 10:09 AM