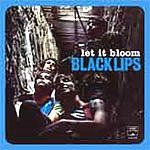 I’ve only a heard a few bands of recent vintage convincing enough to not just recycle ’66 garage punk & “make it sound fresh again”, but to truly make it sound as dangerous and raw as it must’ve sounded in 1966. Despite a little too much fuzz & some overdone snotty vocals, England’s MYSTREATED were pretty hot there for about a year or two, and pulled off the jacked-up American “Back From The Grave” sound real well. Best I’ve heard since them is the BLACK LIPS, particularly on some of their smoking razor-blues 45s like the outstanding “Freak Out”. This brand new CD, too, cranks it up real well early on, & the opening 90-second gate-crasher “Sea of Blasphemy” is nearly perfect. Totally drop-dead simple jangle guitar, muffled cheap-mic vocals and what sounds like a full on Sunset Strip teenage riot breaking behind them. It’s the same sort of a out-of-control cacophony you hear in awesome retreads like THE MORLOCKS’ “In the Cellar” & it is gonna be a staple for all the teen parties & sock hops I’ll be hosting the rest of 2005. The next one, “Can’t Dance” is wild 1977 SICK THINGS/KILLJOYS-like punk with an acre of fuzz & fuck-you attitude to match. Third track in, “Boomerang”, is another mid-tempo ’66 hustler that could’ve come right off of “I Was A Teenage Caveman” or some other ballistic punk comp from the early days of 60s unearthings. Man, this is gonna be an amazing record, right? I wish I could say the quality quotient stayed as knockout impressive from this point on, but it doesn’t. There are many different slices of the psychedelic 60s rainbow that are all performed adequately, and if there aren’t some serious, studied record collectors in this band, I’ll eat my hat. Maybe you get a 1-2-3 groin kick to start a record like this one does, you get all spoiled and expect superhuman feats that just aren’t possible from a gaggle of barely post-teen newcomers. “Let It Bloom” positions these guys as a stupendous 45s band for now, one who might benefit from a little wheat/chaff separation next time they sit down at the mixing desk. I’m telling you though, at times THE BLACK LIPS sound as exciting and wild as the CHEATER SLICKS did roughly 12-13 years ago, and that’s high praise that I definitely would not throw around lightly. I’m marking them on my can’t-miss-live checklist & expect to be suitably blown away when they play my town next.
posted by Jay H. at 8:30 AM