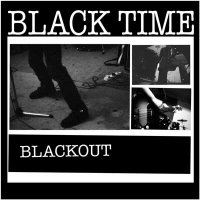 I feel like the only living soul who doesn’t “get” the hype machine on these guys. To me, BLACK TIME approximate the sound of 1990-era PAVEMENT attempting to “go garage punk” after listening to a couple CRIME records, yet not being able to pull off a new bold sound even half as exciting as their own existing mediocre meanderings. Seriously, it’s great to hear the British stand up and take notice of raw American punk in the Dangerhouse style, but how much greater would it be to not weakly ape it with dumb referential lyrics and titles (“First Blood”, “Catholic Discipline”), and instead bust out some true Dangerhouse-like moves? You’re not going to find them here unless you’re a little too easily impressed (and I say this with the utmost of dignity and respect for those wise friends whom I know disagree). Having delved into the deepest corners of this first LP, now CD, in search of the red-hot screaming berserk fury that others are finding, I’m locating only marginal songs and dishwater-gray stabs at dynamism & anger. I went and listened to their 45s and it wasn’t there either. It’s sorta like this band “The Lord High Fixers” whom I once saw, who flailed around the stage, threw shit, broke every string, knocked over everything, and generally did everything in their collective power to let you know that the electrified power of rock and roll was shooting through their veins & forcing them to go bananas. The music was mediocre and tame and I can’t remember a song to save my life. Now maybe if the BLACK TIME guys aimed their guns at some nice, clean, melodic indie rock instead, they’d have a little more luck, as they sound tailor made for alternative radio and the Matador label, and just need to lose all the fakisms that pervade this pusillanimous platter.
posted by Jay H. at 8:02 AM