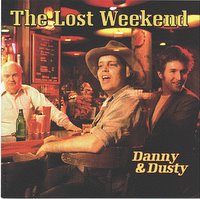 "Think of it, dude...", my cousin used to say as we were tipping 'em back while listening to this record, "...an entire album about drinking!". That in itself qualified as an event worth celebrating for sure, and for first-class, no-doubt-about-it early 80s drunks, you sure couldn't beat GREEN ON RED's Dan Stuart (only Top Jimmy or Black Randy might have out-drank this world champion). When he teamed up with the DREAM SYNDICATE 's Steve Wynn to record a single LP of debauched C&W-tinged saloon rock, the results could have gone anywhere & everywhere, but they mostly went in the right, wobbly direction. "The Lost Weekend" is a motley collection of drinking songs from the key movers of post-"Paisley Undergound" Los Angeles, when large parts of that scene just turned on a dime and went full-on roots Americana. I guess you’d call it a concept record of sorts, one whose theme is as fuzzy and vague as a night spent under a barstool.

The all-time classic here is a singalong called "Song For The Dreamers", which is a bizarre, funny tribute to random characters like ".....Fidel Castro, and Jackie O -- and the boys!!". If you’re not loudly singing along to this with a pint held high by the second time through, you have no heart and no soul, my friend. Sure, Dan Stuart’s rank, squealy-hick vocals take some getting used to, but that’s no less true of GREEN ON RED’s records than it is here. Steve Wynn, by 1985 already well into alt-rock troubadour mode a la his band’s very popular “Medicine Show” and duly recognized the world over as such, takes second banana status to Stuart throughout the LP, almost the “straight man” to Stuart's goofball persona. Chris Cacavas’ excellent electric piano tinkles and plonks throughout, which gives the record a sort of “Exile on Main Street” feel, just even more “barroom/saloon” than that great drinking record. Better still, I continue to see this record in used bins for next to nothing – it’s not a world-changer by any means, but is something you’ll have no problem slapping on when creating some cobwebs becomes a high priority.
posted by Jay H. at 8:33 AM