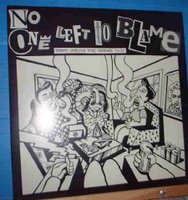 This arrived from a mystery man in the same package as the more recent “STARING DOWN THE BARREL”, and until Terminal Boredom’s recent article from a guy whom I believe to be the same mystery man, I thought these were both brand new, 2005 releases. As it turns out, “NO ONE LEFT TO BLAME” came out a couple years ago, and it comprised the punk 45rpm scrapings of two obsessive collectors who decided to give it one last anonymous-comp whirl, subsequently stretched into two last whirls. I like that these rabid accumulators and filtration agents were able to officially confirm for me again that once the Killed By Deaths and Bloodstains comp avalanche stopped, there really weren't that many choice punk 45s left to unearth. For this one, they found some sizzlers for sure, such as the fantastic dullard stomp of Worcester, MA's COMMANDOS and "Suburb Rock". This is the sort of dum-and-stupid two-chord classic that later trash punk bands like the SUICIDE KINGS cut their inglorious teeth on, and I love that the Commandos' ageless singer simultaneously sounds both constipated and totally loaded. You also can't lose with the tasteful "Dogshit" by ANTLER JOE & THE ACCIDENTS, nor with a great test-pressing only track from the BERLIN BRATS (here called just the BRATS) called "Psychotic". Oh, and you reckoned "Give 'Em a Fight" from Buffalo's WRECK'N CREW would be some dumb-ass oi garbage? No way hoss, it's a '77 style screamer, from a guy named "Oil Can" or something who later moved to Chicago to form THE EFFIGIES. It's a solid, high 3rd-tier punk compilation all around, featuring stuff insanely limited and available either for 50 cents (thrift store in Lincoln, NE) or $500 (eBay) -- or whatever it takes to secure the 20 tracks here in one convenient 12" package.
posted by Jay H. at 7:37 AM