AND WHAT COSTUMES SHALL THE POOR BOYS WEAR..... 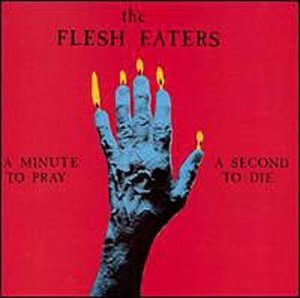 Rumored for over two months, it appears that MUDHONEY, the hosts of a full day of self-chosen rock acts at the UK's All Tomorrow's Parties fest on May 12th, have actually secured the OK of THE FLESH EATERS' "A Minute To Pray, A Second To Die" line-up to reunite & play the gig. Which is pretty neat if you ask me. Maybe because that's like my favorite album of all time, or maybe because it was probably a semi-herculean effort to convince Chris D., John Doe, DJ Bonebrake, Dave Alvin, Bill Bateman and Steve Berlin to all hoof it out to England for one show. Whatever - it's done, and since I'm not going to myself hoof it to the sceptered isle for a rock show, it's time to get on the horn & start talking up some US dates for these guys.
posted by Jay H. at 12:54 PM