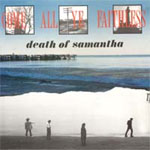 While this band was around the latter half of the 80s, I counted them among my very favorites. That hadn't really been at all apparent the last 12-13 years, given the amount of times I've actually listened to DEATH OF SAMANTHA during that recent epoch is about this many: zero. Okay, I believe I played the excellent "Strungout on Jargon" in my bedroom once in the late 90s. Not really sure why I hadn't been coming back with glee, but maybe the band just got time-stamped as retro/dated in my head as one of those college-era acts that I probably wouldn't get too hopped up about in my advancing age. My recent foray into a digitized version of this 1989 LP tells me that -- for the most part -- that just ain't so.

"Come All Ye Faithless" was their final release after two other fine LPs and an EP, and in a lot of ways I think it was their best one. Man, at the time (1989-90) I played the cover off this record, and hearing it again years later with thirtysomething ears was nearly revelatory, in the minor, vaguely pleasing way that hearing something you once knew like the moles of the back of your hand but had completely forgotten is revelatory. Take "Geisha Girl", the record's most pumped up Dolls/Stones/'77 punk-like hybrid; I plum forgot every riff and verse in this song until I heard it again on Christmas Day, and then remembered that not only is is just a flat-out "boogie" blast of a rock song, but that I had also played it to death, nearly every week, on my '89-'90 KFJC radio show. I proceeded to play it over and over in my car at top volume, and ahhhh -- just took in those golden, fading memories. I then remembered how, at the time, I had to actively & stridently defend my love of this band to some folks, since many were totally off-put by John Petkovic's weirdo, tin pan alley cabaret voice , and the fact that the band were inclined to dress up in platform heels and feather boas on stage, just for a laff. I remembered seeing them headline over THE DWARVES and a young GREEN DAY at Gilman Street in Berkeley (!) shortly before they broke up, when all of 6 people stuck around to check it out (why, lord, why?). They were great, just as they'd been in Santa Barbara in front of three times that many people circa 1988, when touring on their second album.

So, now having remembered why I'd been such a Death of Samantha partisan, let's turn our attention to this record. Byron Coley, in this excellent Cleveland Plain Dealer piece, called this one of their "mature" records, but I certainly detect a little tongue-in-cheek w/ that proclamation, as these guys seemed to be about taking the piss out of rock and roll with exaggerated, theatrical sweeps, both lyrically & musically. On the latter front, despite a pretty simple plan of attack, they weren't that easy to pin down -- like a uptempo, punk-infused Vegas bar band with a lot of Cleveland Rock City ghosts to draw upon when needed. The first couple of tracks, "Roses Rejoice" and "Rosenburg Summer" are easily going to make or break you when it comes to this band; if you can stomach these maudlin, overwrought semi-rockers then you're on for life. I love 'em. The aforementioned "Geisha Girl" and "Now It's Your Turn (To Be a Martyr)" are probably the two best songs they ever wrote outside of their classic "Blood and Shaving Cream", but then the second side's a pretty weak pot of lukewarm Cuyahoga Grey. I couldn't even remember these ones, because I didn't even flip over to listen to them back in the day. But when you think about how ripping some of this band's stuff was, it's at least a venal sin that absolutely none of it's on CD. At least a best-of, right? The band essentially soldiers on to this day as COBRA VERDE, and try as I might to get interested, I've just never connected with the cut of their jib. But if this is the first you're hearing about DEATH OF SAMANTHA, think about scouring the used bins a little for this stuff - you might find one of the singularly great late 80s bands' complete works available for a mere song.
posted by Jay H. at 8:01 AM