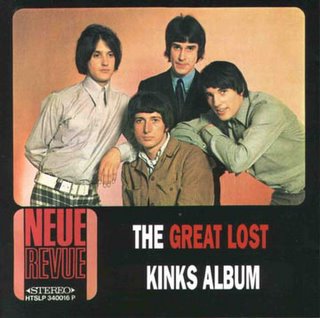 The litmus test for the "outtakes" bootleg (as opposed to the live bootleg, the demos bootleg or the every studio piss-take bootleg) is whether or not you discover tracks greater or equal to the band's studio material of the era. By that token, "The Great Lost Kinks Album" is a whopper. By my count there are not 1, not 2, not 4, but three golden outtakes from the band, spanning several conceptual periods in their early development. They have every right to be called classics, or -- if I may be so lame -- "klassics". The first is "Time Will Tell", a guitar-driven, "Kinks Kontroversy" outtake, that's so instantly catching I only needed to hear this Brit-invasion stomper twice before it became my perpetual inner soundtrack for days. Then there’s the raucous singalong “She’s Got Everything”, which isn’t really an outtake, since it was a late 60s b-side that later turned up on “The Kinks Kronikles”, but man – what a number. The solo alone is just vintage Kinks, and why this wasn’t a Top 10 a-side is beyond me. I’m also really smitten with “Rosemary Rose”, a “Something Else” leftover from 1967 that’s a sensitive portrayal of a fellow lost soul. But hey, those are just 3 of the 30 songs on this collection, and most of the others are pretty fetching as well.

Just one question, and it regards the vaudevillian, fake-comedy “When I Turn Off The Living Room Light”. I had my own spit-take when I heard the opening lyric, “Who cares if you’re Jewish…” when coupled with other physical transgressions of the woman in question (garlic breath, bulbous nose, ugly hair, spotty face). He said what?? Call me old-fashioned, and I’ve never heard of any peeps raised about this decidedly sub-standard song before, but isn’t listing a person’s god-given ethnicity as a shortcoming, alongside and of a par with her physical deformities and her character flaws, a bit – uh – uncouth, to say the least? I know it’s supposed to be playful, and that Uncle Ray ends up loving her anyway, but it’s a fucking bizarre sentiment to hear pop up in a Kinks song. I say you need to procure this excellent bootleg by any means necessary, and then write your protest letters to Melody Maker and Record Mirror, or turn up with shouted slogans & picket signs the next time the Kinks turn up on Hullabaloo or The Old Grey Whistle Test.
posted by Jay H. at 8:24 AM