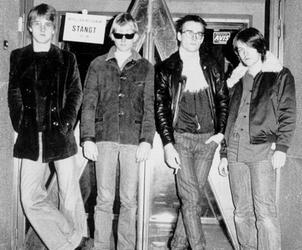 First got a load of the wild, raw/fuzzed early Swedish punk band KRIMINELLA GITARRER when I mailed off the first MONOSHOCK 45, which I was fortunate enough to have been allowed to release in 1994, to Tom Lax of Siltbreeze Records. I can't remember whom he paired the x with in "Monoshock sound like a cross between x & y", maybe it was Chrome or Hawkwind or the Lemon Pipers, but I do know the y was Kriminella Gitarrer. I said "tell me more, o wise one". He told. Right around that time the band's 1977-78 tracks began showing up on collector scum punk comps, most notably those excellent "Bloodstains Across Sweden" records, and I quickly added them to my internal pantheon of the most fire-breathing, raw, devour-you-alive punk bands of all time. I resolved to tell others the news. I played KG for the Monoshock guys and they couldn't see the resemblance, but what are you gonna do, right? A few years later a Swede of my acquaintance kindly sent me this LP compilation of their complete works and then some, and it is this work that we will be briefly discussing today.

I review this having learned mere minutes ago in my travels across the world wide web that a CD version of this record (with even more extras) is now available, called "Forbjudna Ljud 1977-1979" - how about that? Reasons to get this thing: One, Kriminella Gitarrer released three 45s that are so over-the-moon killer & slashing, you'd have to be a Mountain Goats fan to stay away -- of course I'm talking about the records with the immortal "Silvias Unge" (whoa!), "Vardad Kladsel (wow!), and my favorite, an easy candidate for Top 40 punk songs of all time, "36 Patroner". Two, the guitar on these is like a rubber band rocketing off its hinges directly to your exposed eye -- totally wobbly & weird, but run through acres of distortion pedals so the cumulative effect is muy dense, and still incredibly fast & propulsive. Three, the demos on side B, while nowhere near the quality of the official stuff, are even louder & more cutting; total ear bleeders that sound like a particularly sweaty practice session run through 50 amplifed cheese graters. Four, us fans of the Scandanavian languages can't get enough of titles like "Knugens Kuk" and, that's right, "Anarki"! I'm usually waaay behind the curve in recommending unheard punk bands to folks, since that plate's been cleaned long ago, but if you haven't heard these guys, and I reckon there's a few of ya, sounds like there's a new CD out there waiting for you to get involved with it.
posted by Jay H. at 9:10 AM