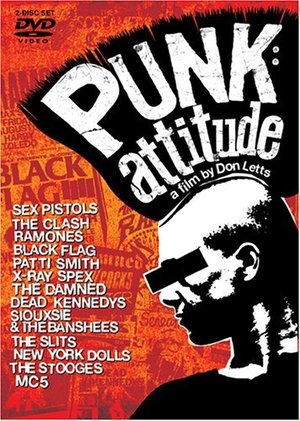 Watched a pretty dumb DVD the other night called “PUNK: ATTITUDE” that had some terrific footage at times, but laid on the “punk means fuck you” BS so thick you could barely cut it with a liberty spike. Sure, I know that THE WRECKS taught us back on “Not So Quiet On The Western Front” that punk is an attitude, and for millions of disaffected youth and aging dullards, that’s gotta be a pretty liberating method of self-definition. Aside from the teenage adrenaline that comes from flipping the bird and slamming your ass off, though, punk is just another slice at the rock and roll pie, one that happened to come along & was going strong when I first heavily got into music, and is therefore one aggressive sub-genre or rock that’s very near and dear to my heart. So looking for some good video snaps of some wild-ass rocknroll bands, I invested nearly 90 minutes into Don Letts’ documentary on the matter. I will say that he threw in some terrific but clipped clips of the NEW YORK DOLLS doing “Personality Crisis” on German TV that were just rabid; and some cool SLITS footage that I’d never seen before of the gals galoomping around a park carousel to the funky reggae beat. One surprise was that this Brit actually got it right and focused his lens and storytelling on the American roots of the genre, and only went back home across the pond when he’d fully explained the UK version’s true lineage. Nice magnanimous touch there, and one that I didn’t expect. In fact once the UK version was played out around 1978, he gets in some digs at the homegrown EXPLOITED/GBH ridiculousness that followed it up before turning his camera eye back to America and the exploding hardcore scene.

With so much to cover over nearly 40-odd years (he starts the tale with Jerry Lee Lewis!), it’s probably a given that any individual stories would need to be told VH1-style – quickly and omittingly. So when you get 10 seconds of any particular act you like, you scarcely have time to focus and take it in before Henry Rollins pops up on the screen and flips off the camera again to underscore the rammed-home point that Punk = Attitude. Oh, and those clown princes of punk commentary, John Holmstrom and Legs McNeil, make far too many passes at the camera and only serve to devalue the entire enterprise – nay, the entire genre of punk itself. Ah well. At least Alice Bag got in there for 2.7 seconds, Brendan Mullen for maybe double that. And as we all know, punk continued on and was best represented post-hardcore by AGNOSTIC FRONT, who live large on this DVD with some awesome sweaty stomping and burly man hugs that Letts takes admirable pains to not take condescending swipes at. Punk then turned into Nirvana (and late-90s Sonic Youth!), and then into BLINK 182. And here we are today! Punk is still an attitude (Jello Biafra often checks in to tell us so), parents hate it, and it’s for the little guy who wants to stand up, thrust out his middle fingers and say, "Fuck you, cop/mom/society! I don’t need to play by your fuckin' rules!” . And yes, with all the problems we have today (cue photo/video montage of George W. Bush and Tony Blair, a big-ass bomb, some consumer blindly shopping in a supermarket – no, I’m not kidding, it ends the film), what we really need is a little more punk attitude, right? Like I said, a pretty dumb DVD to spin for 90 minutes, when I could’ve instead glued my can to Stormwatch 2006 footage. Is it true that the bonus disc has rare footage of TAMPAX, KRIMINELLA GITARRER, DESPERATE BICYCLES and RUTTO? And a long interview with the guys from the VOMIT PIGS? You’ll all have to let me know if that one’s any good.
posted by Jay H. at 8:35 AM