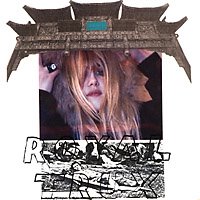 Note: This thing was written for another publication back in 1997. I stand by its dubious assertions to this day.... :

The art of ROYAL TRUX has given rise to much hyperbole over their many musical journeys -- they have alternately been outcasts, saviours, sell-outs and saints to the same talking head. Their most lavish praise, however, has generally been accorded to their work between 1988 and 1992, the bookend recording dates for this mind-bending 45. The record effectively serves as a marking point between periods, a time when the delightfully idiosyncratic duo were drifting from the drug-fueled bafflement of their double LP "Twin Infinitives" into the spaced-out but rock-structured sonic freedom of their third record. Linear thinking was only now becoming part of Royal Trux's musical vocabulary, and "Red Tiger", its actual pre-"Twin Infinitives" recording date notwithstanding, is their unequaled masterpiece.

Comparisons to past psychedelic warlords are futile, because Royal Trux were decidedly of their own time and place. As one pundit put it, "it is as if they compose their works in Esperanto". Theirs was not a universal language of the world, however; "Red Tiger" moves to a rhythm that is jagged, semi-improvisational, and yet ultimately rooted in rock. Its chorus is a distant chant, and its last minute is a slow, heavy-lidded fade into another world. One expects to flip the disc to hear a continuation, a "Red Tiger Pt. 2", but......no. For a band that until this time had eschewed cover songs, their take on Jefferson Airplane's "Law Man" is wonderfully in character. It fits in snugly with their sorta hippie-ish, sorta rebellious, we-oughta-be-busted vibe. They churn through the tune with great dual vocals (Neil Hagerty's voice was the duo's secret weapon) and a throbbing bass sound -- new equipment, new regimen, new attitude! Where they actually thenceforth traveled with that attitude is up for debate, but for a few years there Royal Trux were quite possibly among America's leading lights.
posted by Jay H. at 8:11 AM