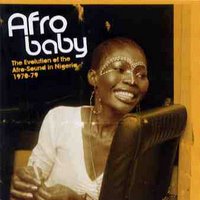 My rabid enthusiasm for the recent riches unearthed on Soundway's' two "GHANA SOUNDZ" volumes led me to plunk it down for this one as well - same label, just covering Nigeria's raw and soulful "afro-sound" this time. You know, I'm getting so schooled about this stuff now that the other day I won a free dessert treat from a local cafe just for answering the trivia question, "What is Africa's most populous country?". Why, my barrista friend -- that's Nigeria of course. Thanks to Soundway for helping round me out a bit, pun definitely intended. And it came as little surprise, given how hot those "Ghana Soundz" collections were, that this one smokes as well. Solid up and down the lineup, with 12 bold tracks of post-highlife grunting, sweating and horns-a-plenty.

What's become clear as I've attempted to read up on African funk/jazz/soul of the 70s was just how high FELA KUTI lorded over this scene, & what a continent-wide force the man was. In most folks' eyes, there was Fela -- and then there were Fela's imitators. I myself don't know enough to comment, but there are some tracks on this one that destroy just as mightily as Fela's own "Fogo Fogo" on here does. Take BOLA JOHNSON's "Lagos Sisi" - sure, you definitely hear a JB's-style funk workout being copped a bit throughout this one (nay, throughout this CD), but it's a lowdown, percussive, thoroughly Africanized version, with hints of jazz exploration ready to pilot the 20-man group to the proverbial moon. ORLANDO JULIUS & HIS AFRO SOUNDERS also clock in with a rabid 7-minute funkster called "Mura Sise" that's simply gotta be heard. I've been bored by African collections before, where I've felt I'm listening more as a cultural anthropologist than a music freak, and in such cases, I call a duck a duck and get the hell out. Not so on the three Soundways discs I've heard - I can't recommend this scorcher and the Ghana Soundz stuff highly enough.
posted by Jay H. at 8:33 AM