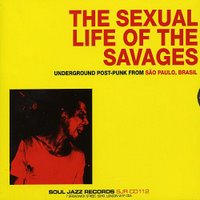 So this is a joke, right -- the Brazilian post-punk scene of the 80s? I'm sure it will please forward-thinking, booty-shaking Brazilians to no end when I say that I had no friggin' idea. But let's not get too worked up about it, folks -- it's cool, us Americans, Europeans and Australasians can still sleep solidly knowing that our post-punk, our dear, dear post-punk was still so much better than that of the South Americans. But hey, Brazil was the home of some pretty incredible music in the early 70s (OS MUTANTES being my faves), it stands to reason that no matter how many freaks the rightist death squads tried to silence during the interregnum, there'd still be some lingering pixie dust of wackness left over. And that'd be right. Particularly in the case of AS MERCENARIAS, who wisely were picked to kick this compilation off in fine style with two sizzlers -- "Inimigo" and "Panico" - both outstanding exponents of the oft-discussed 1980-82 British movement of female-fronted, bass-driven scorch. DELTA 5 and all that -- we sure talk about it enough. Fairly eye-opening that it would not only catch on in Brazil, but that it would be played so incredibly well & sped up with Latin fire in the belly. Excellent. I've also recently heard their LP "Cade As Armas" and there are some whoppers on there as well. Soul Jazz, who put out this comp, put out an As Mercenarias compilation as well last year that's now been moved onto my to-do list.

Honestly, though, that's about it -- unless you're a "waver", then you might still get excited. This "post-punk" is very UK-chart-pop-of-the-80s-influenced, and no matter how much the reviews throw out Public Image Ltd. and The Pop Group, I hear zilch of it. And I don't even really like those groups, so I'm not blindly defending anyone's honor. A Certain Ratio, maybe. Whatever. I hear a lot of bands shooting for ABC and PSYCHEDELIC FURS country and succeeding rather well, and others that are just so godawful that they sound more like synthesizer-era TUBES to me. Worst offenders have got to be FELLINI (ouch!) and their mopey synth tracks "Rock Europeu" and "Zum Zum Zazoeira" - kill me now. Seriously, if you've got to hear it then go right ahead, but I'm betting you'll be roasting up the two AS MERCENARIAS tracks and then firing this thing into your to-sell pile faster than you can say "Luiz Inácio Lula da Silva".
posted by Jay H. at 8:38 AM