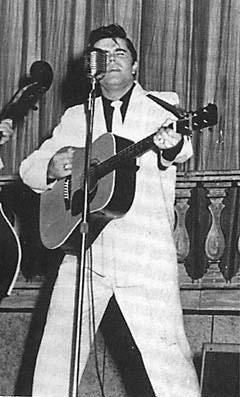 You might know WARREN SMITH from his smoking chicken-fed rockabilly “Uranium Rock”, the one the CRAMPS covered to much applause in the early 80s. At least that’s how I knew him before this comp hit my desk. Found out that there's an internet-only "rockabilly hall of fame", and Smith is in it! How about that? I guess I can see why -- his roughshod, country-hick style screams "1950s rockabilly on Sun Records", and as one of that label's middling-to-major players, well, you may not have heard much about him but you probably know a small handful of his songs. The very tasteful and politically correct "Ubangi Stomp" is an all-time classic, and another dilly from this krazy Memphis kat is his debut, "Rock N' Roll Ruby". Honestly, though, it's hard for me to get too worked up for much on the way out-of-print "So Long I'm Gone" collection outside of those deserved attention-getters. (I am, however, glad that this 1987 Charley comp is a nearly-chronological overview of his 1956-59 singles). His country 45s -- like the far superior CHARLIE FEATHERS, he was cutting both rock & country sides for Sun to see which style would take him beyond local radio -- totally sound like Hank Williams knock-offs, mostly devoid of anything outside of opportunism. I'm sure there's a handful of Fonzies who will beg to differ, and that's cool. Post-1958 stuff is just dead as a door knocker. I reckon my take on Smith is that he may be a rockabilly giant, worthy of a web-only hall of fame even, but he's just a burned CD with xeroxed artwork stuffed into a plastic sleeve to me. Sometimes -- lonely times -- that's just enough, right?
posted by Jay H. at 8:31 AM