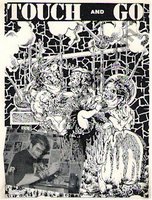 Last time I wrote a piece of this nature I plucked 5 old fanzines I used to read out of my memory banks before I started writing & wrote up blurbs accordingly. This time, I’m not even sure which ones to pick, so I’m going to start thinking of some right now to reminisce, review and rake over the coals if need be. I’m writing this on an airplane and don’t have internet connectivity, so I can’t even cheat with a few surreptitious dips into Google. So let’s start with.....

TRULY NEEDY – I believe this was a Washington DC based ‘zine from the post-hardcore era, yet one that didn’t hue too tightly to the “emo” scene that nearly destroyed music in that town for a subsequent decade. No, the one I remember buying had THE MINUTEMEN on the cover, had a gaggle of informed and well-spoken reviewers, and put a lot of thought and effort into a pretty packed newsprint-based fanzine. Professional enough to be sold on the newsstand & to have been a strong, relatively snark- and irony-free voice at a time when that the rule for East Coast fanzines. Either I never saw another issue or they folded up the tents around 1985 or so.

TOUCH AND GO – Overrated. No, I don’t dispute that Tesco Vee & co.’s taste in hardcore punk during its glory years wasn’t impeccable; they were situated in one of its Ground Zeros (Michigan/Ohio) and were active players in the scene themselves. But I guess pee-pee humor and homo-bashing hijinks really would seem a little – uh – dated if I deigned to pull one of these from my musty garage boxes today. Their “articulation” (far too much credit is given in the word alone) of an anti-MRR, anti-PC stance was refreshing, but it was replaced with nothing of substance aside from coverage of some rad bands at a time when learning about said rad bands came only from fanzines like this. Its modern equivalent is HORIZONTAL ACTION, who, with all due respect for a mag that’s turned me onto some smoking garage blazers, starts virtually every interview with “What’s your favorite sex position?" and continues downhill from there.

BRAVE EAR – This San Francisco-based digest printed on higher-quality stock than its contemporaries and always came off as the leftist intellectual big brother to the slammin’ Sandanistas over at MRR. If I remember correctly, their heroes tended to skirt the more experimental elements of 1984-87 indie rock – your SAVAGE REPUBLICs, your SLOVENLYs, while still honoring long-servers such as THE MEKONS and ROBYN HITCHCOCK. Looking back, I can’t think of a single band they turned me onto, nor can I remember a single writer for the mag, but I probably have a good 4-5 issues sitting around waiting for a 20th-anniversary thumb-through.

DISASTER – I’m not going to write about it again, but a while back I did a little thing about Bill (Smog) Callahan’s excellent 80s ‘zine here.

COSLOY YOUTH – And speaking of Cosloy Youth, I DJ’ed with one of the fellas behind this short-lived project, Ray Shea, at KFJC circa 1989-90. He told me then that, like just about every other dork with an expensive fanzine-purchasing habit funded with Dad’s college loan checks (I count myself in this category several years earlier), he and his pal were so enamored with Gerard Cosloy’s style and rapier wit in CONFLICT that they decided to up the dose and put out their own approximation. I can’t remember much about how well they succeeded in said endeavor, just that they liked the same bands I did and that I got a few guffaws out of it. Ray was a cool guy & I hope he’s living large somewhere.

(CAN’T REMEMBER THE NAME OF THE ‘ZINE) – In the early 90s I had my own fanzine up & running, and in the same year, maybe it was 1991 or 1992, I got two outstanding ‘zines in the mail from San Diego & made two new pen-pals as a result. One was Tim Ellison’s ROCK MAG, subsequently MODERN ROCK MAGAZINE and now the online MUSIC CHAMBER. Tim & I have been longtime correspondents, even if we rarely dip into the same music any longer. The other was from Glen Galloway, an extremely cool, fiercely independent individual who was soon to start up his band TRUMAN’S WATER, but I can’t for the life of me remember the name of his short-lived, digest-sized photocopied ‘zine. I remember that he wrote eloquently about freakier, jazzier acts like Saccharine Trust and/or Can, while also getting down to the heyday of third-wave garage punk as well (Gories, Night Kings, Cheater Slicks etc.). Like Ellison, he adopted a completely non-antagonistic tone in his writing – just the facts & the summation, with none of the bitter baiting that admittedly makes many ‘zines and blogs a little more fun to read. That said, he didn’t need it, as (fill in the blanks) was one of the better fanzines of its times.

And with that, I invite your comments. Last time I posted on fanzines I think you set an Agony Shorthand record for # of comments posted, which speaks to the connection they had to many of us music obsessives in pre-Web days. Maybe if I can think of 5 or 6 more to rattle off I’ll do another round of revisionism in a month or two.
posted by Jay H. at 9:40 AM