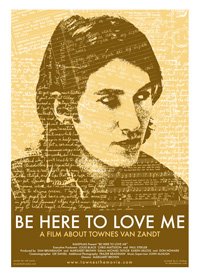 I don't suppose I could really have asked for a better film about the crazy life & twisted road of TOWNES VAN ZANDT than this excellent documentary provided. It's so good that I'm going to come out and give it the full 5-star recommendation, even if you've never heard his music -- which, while the number of folks in that camp is slowly dwindling, is still pretty considerable. I'm not even sure why I clicked with his music so instantly upon hearing it roughly 12-13 years ago. I'd never before fallen in with any sort of folksinger, and since Townes wasn't really country per se -- just an adopted Texan with some country leanings -- the fact that I proceeded to buy up nearly his entire discography after hearing "The Late Great Townes Van Zandt" (still my favorite) said something. His music, while often sad, was rarely devastating, and was completely free of cliche. The guy could just flat-out write a great song - sometimes it was sorta funny, sometimes it was mopey, and sometimes it just called for some personal late-night pondering & navel-gazing sessions. Even if you don't dig it, I'd be very surprised if you felt bored or unmoved by this 90-minute portrayal of an exceptionally complex & hidden individual.

I suppose I half expected filmmaker Margaret Brown might martyr poor Townes into a caricature, given that his life was marked by alcoholism, depression, and adolescent electroshock therapy. While all were a backdrop to the cinematic story of Townes the man, Brown did us all a service by neither dwelling on nor ignoring his shortcomings & "issues". She lets others tell his story - no narrator -- and while hearing from Guy Clarke, Willie Nelson, Kris Kristofferson, Kinky Friedman and others is great, the best interviews by a landslide are with his kids & three ex-wives, as they were the ones who've most had to come to terms with who he was in the wake of his 1997 death from heart failure. If you can judge a man by the company he keeps and by his own progeny, I'd have to say you'd judge the issues-laden Van Zandt quite well, as something about his wives & children's rememberances made me unspeakably fond of them personally. I also loved how Brown made sure that all the footage running in loops throughout the film was time- and location-specific, so sprinkled in between the many clipped interviews & footage of Townes live or on camera are quick, grainy loops of 1970s cars driving on 1970s Southwest highways, or sunken-eyed Texans living in trailers and drinking in alleys. It works. Like I said, my first thought exiting the theater was how I was going to tell anyone I knew with half a brain how much they needed to see this documentary, whether they'd heard his fine music or not. Then I remembered that I had this blog, so now I'm telling you too.
posted by Jay H. at 8:04 AM