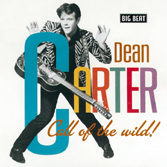 My first impression of this guy's heroic, unhinged 1967 take on "Jailhouse Rock" when I heard it on a bootleg called "Ear Piercing Punk" was that I needed to grow up a bit, get some hair on my chest & come back in a few years when I could really handle it. Recently, a friend made me a compact disc recording of this 2002 collection of DEAN CARTER's 1959-69 works, most of them unreleased, and I heard that original 45 again with new ears. What a "gas" it is -- a truly wacked piece of freeform insanity, with an assload of instrumentation squalling in every corner as Carter revs up his best (worst) Elvis impression. To help you relate, here's a snippet I stole from "The Seth Man"'s review of it on Julian Cope's site:

".....“Jailhouse Rock” had been recorded ten years prior by Elvis Presley. And one long decade later its grease was mishandled on this ‘67 version of that particular big house breakout as Carter and gang went gonzoid gaga and cut loose like nobody’s business all over it. Erupting with a furious drum roll introduction into a pounding “Hawaii Five-O” big surf beat penetrated with Morse Code tootling away like interplanetary interference over high tension wire rhythm fuzz guitar, one can only immediately wonder how this mess is ever going to become “Jailhouse Rock”, if at all. Then Dean The C starts barking and rasping out the familiar primary line about the warden throwing a party in the county jail, and then it all becomes clear. Dean is not gonna pomade-by-numbers, he’s gonna pay tribute to The King in the most reverential way possible, and that’s by not being reverential in the least and just run the song over like rock’n’roll roadkill in his Midwestern Weird-O jalopy at full speed. It’s an assault and a terror and a hoot and a holler -- especially when the background keyboards slip into the unlikely realm of Dave “Baby” Cortez ivory-hunting on “California Sun” with The Rivieras.

After two verses of this, Carter steps out with a 12-string dobro solo. Actually, calling this sound of a metal tube pumped up and down electrified strings at top speed a solo is like calling the sound of overactive workers at the sheet metal factory doing double overtime by press forming and cutting four sheets at once a ‘solo.’ It’s sick and the only other thing this metallic shearing zigzagging is reminiscent of is the explosive slide guitar that rung down The Syndicats’ “Crawdaddy Simone” coda’s curtain so fiercely.

Finally, Carter’s hoarse and hasty vocal swagger brings it all back home and reaches critical mass when barking out that most immortal line from the collective pen of Leiber/Stoller “The whole rhythm section was the Purple Gang!!!” in his rush hour collision of a pronunciation makes seem more a single word, “Horiddumsexywuzzapuppergan!!!” And he’s in such a damn hurry, he tacks on the next line “...letsarock!” at the end, and proceeds to just go “Oh!” “Uh!” “Come on!” to usher the aberrance out to fade....."

There are other head-smacking where-did-this-come-from moments on this disc as well - take Track #2 "Mary Sue", which is just note-perfect hopped-up rockabilly, from an Illinois studio freak who was neither Southern nor truly of the rockabilly era. I guess this fella greased up his hair, threw on a leisure suit, then sauntered out with the late 60s hippies and love children a la Lux & Ivy a decade later. Not like you'd really know it - the only hint that some of these wild rockabilly numbers are not circa 1957 or so is cleaner production & some added jarring effects. Carter didn't stick to rockabilly, either - he tried his hand at country, barrel-piano barroom shouters, and dirty South rock and roll with varying degrees of success. Most of the successful ones are captured in the CD's first half; I think I started to tune out both times through this around track #18, "Dobro Pickin' Man", which at least garners points for the track sequencers at Ace Records. One number worth recounting is an outstanding fuin-the-summertime anthem that just had to be Carter's bid for the Top 40, "Sizzlin' Hot" - yet it's still too raw & muddy to have made a chartbusting dent to my ears. After all, "Psychotic Reaction" & "Dirty Water" were flukes, right? Seems a shame that left-field rock and roll this great should only be making an appearance this decade, and of the 28 tracks here, 22 of 'em made their first peek on this very CD (!). I wonder what ever became of Carter, and why he's not in the internet-only "rockabilly hall of fame"?
posted by Jay H. at 8:50 AM