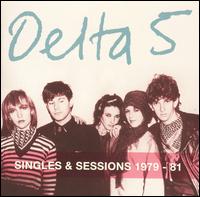 For some reason, DELTA 5's three classic 45s couldn't get a hearing even on some micro-pressing of an LP until Kill Rock Stars strutted up to the plate & hit it out of the yard. This is likely to be my favorite reissue of 2006, hands down. My fondness for the Delta 5 dates back to my teenage discovery of college radio at the same time they were around, & my local station wore the grooves off their 45s, particularly "You", "Colour" and "Mind Your Own Business". The band was probably the first female-fronted "post-punk" act I took to heart back in the day besides SIOUXSIE AND THE BANSHEES (whose early 80s ouevre recently came up for reappraisal in this house and passed with flying "colours"). Until recently, they were a blip on the radar for most folks - always lumped in with contemporaries the AU PAIRS, despite having a far more consistent early body of work, and years after lesser UK lights have been compiled and discussed ad nauseum, the Delta 5 finally have their works assembled as they've needed to for years.

Better still, the label opted to scorn compleatness & axed the band's mediocre LP "See The Whirl" (their deservedly unheralded swan song) in favor of excellent, unreleased tracks from three 1980-81 BBC radio sessions (two Peel, one w/ Richard Skinner) and a same-period live show from Berkeley, CA. These are generally ecstatic, skittering, bass-heavy compliments to the repressed DIY agit-funk of the 45s -- with "Make Up" and "Train Song" being nearly as good as any of the six legit songs. (One thing about Peel Sessions in general, most sound so great that they often could or should have been cut up & pressed as 45s in their own right). I still freak over the crispness & sting of the whiplash guitar in "You", one of my all-time faves -- and over the pent-up tension release from the angry lassie mouthing the words. And "Mind Your Own Business", the one everyone knows if they know anything by this group, is such a friggin' whomper - a leading exponent of that uniquely weird period in UK rock music where one person's disco was often another person's snotty punk rock. Only bummer was the liner notes - a recycled Greil Marcus thing from 1980 (!) and a terrible self-referential essay by Jon Langford about his personal role with the band (boo!). What, the '5 were too busy to give it some context & remberances on their one & only shot? That said, the folks behind the assemblage here did this band justice and then some, and I'll gladly cash in any credibility chips I have to get you to pay some attention to this one.
posted by Jay H. at 8:47 AM