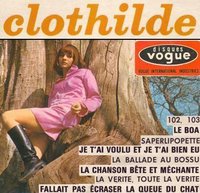 Continuing our “wimp-out” week festivities, if you want to hear what I consider to be the single best of example of happening 60s French girl pop, and get all 8 of her rare EP songs in one fell swoop, then go to this fine mp3 blog site BLOW-UP DOLL and scoop up the entire CLOTHILDE discography. You’ll be floating on a cloud of sugar, spice, baguettes and brie. Pay super close attention to the song “Fallait pas ecraser La queue du chat“, because it’s perfect. I mean it.

“……CLOTHILDE, as heralded by one JV in these pages, made some of the most gourmet candy-coated 1960s French pop music you’ll ever hear. “Saperlipopette” collects both of her 1967 4-song EPs into one very short CD, and is produced with just enough bells & whistles (and horns & triangles & keys & other cool effects) to qualify as a gallic OS MUTANTES at their most pop-friendly moments. The “popettemaster” in Clothilde’s closet was one Germinal Tenas, who ought on this work alone to be standing well astride the 60s pop producer pantheon, along with Joe Meek & Phil Spector. From the Ye-Ye Girls website:

(Clothilde was) a protege of renowned producer Germinal Tenas (an alias for Christian Fechner). Germinal worked with punk Antoine et les Problemes, Christine Delroche and he later formed his own band, Chorus Reverendus. He enjoyed mixing traditional pop sounds with weird instruments like the French Horn. The result was a strange and splendid baroque pop, not dissimilar to Shadow Morton's productions for The Shangri-Las, and every one of the eight songs Clothilde and Germinal did together are musts!

I heartily concur. The kick-off track “Fallait Pas Ecraser La Queue Du Chat” may very well be the “Please Don’t Talk To The Lifeguard” of the 1960s French pop genre – pure sunlight and production genius, with enough mile-wide hooks to hide a whole decade’s worth of weapons of mass destruction in. It’s so goddamn great you also get it in Italian at the end of this CD…..”