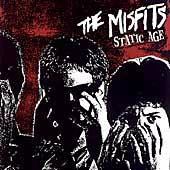 I remember how, uh, squeamish I felt -- no, silly is a better word -- walking out of a record store circa 1996, with a big black coffin-shaped box set in my hand containing four MISFITS CDs. Oh, it also had a dumb-ass skull pin and a color book with pictures of Eerie, Googy, Dopey etc. It cost me something like 60 bucks, but I'll admit that when I got home, I tore the motherfucking packaging off this bad boy & put the 1978 "Static Age sessions" on as high as the hi-fi would take me. See, I'd never heard 'em in their entirety before, despite my having accumulated a modest collection of Misfits live & demo bootlegs over the years. Hearing this aborted first album in its entirety was an event for sure, as I'll maintain to my grave that it's not only the finest Misfits material ever, but one of the original wave of American punk's finest records, hands-down. Lost in the stupidity of the band themselves is the fact that early on, when it came to writing a brutal, well-produced punk rock classic, they had virtually no peers outside of the Dangerhouse clan.

Despite THE MISFITS being the poster child for my ongoing "Lyrics Shouldn't Matter" campaign, I'll admit to getting bogged down at times in the martians/monsters/murder talk, even on this one. But I suppose I've heard it so many times that it goes right over my head now, until I find myself singing along in a low whisper & watching people slowly back away from me & my headphones. Before that box set (and this record, subsequently reissued with 3 more corkers) came out, my favorite Misfits stuff has always been the crunching "Bullet" 45 and the "Beware" stuff -- which not coincidentally were all from these '78 sessions. Come on, you can't deny the power and the unbelievable hooks in tracks like "TV Casualty" or "Angelfuck", which are recorded so masterfully and yet retain such raw beauty they've inspired both wise sages & doofus dolts the world over to get up n' slam for nearly 30 years now. Not to mention "Bullet" itself, which is a friggin' masterpiece. It was revelatory in 1996 to hear the finest stuff ever laid down from a band I'd been into for years, years after I'd ingested everything else they'd released. So I hope you lay your prejudices to the side, get some anasthesia flowing through your frontal lobes, and join me in a wondrous celebration of this top-tier record.
posted by Jay H. at 9:11 AM