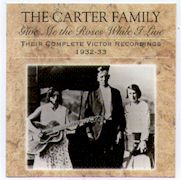 I started collecting the 9-volume ROUNDER series of original CARTER FAMILY recordings when they started trickling out in 1993, and this one that arrived in the mail last week was the last piece of the puzzle, despite its having come out in ’97. All nine CDs are now deleted and are increasingly hard to find (got lucky and got this for a normal price, but typically they’re $30+). The CDs that really converted me to the Carter cause were the first two, “Anchored In Love” and “My Clinch Mountain Home”, as these were their earliest 78s from 1927-29 and contain their most classic raw country ache, including the grand majority of the songs they’re most popularly known for. The way Rounder did this was to pretty much stack up all their 78s in rough chronological order, cut them into batches of 15-16 songs, and then released them in order on CD. As I understand it, they didn’t get absolutely everything ever waxed (there were a lot of “border radio” recordings, for instance), but they did get virtually everything recorded by Maybelle, Sara and A.P. for public vinyl consumption. This one, “Give Me The Roses While I Live”, features material from the middle of their career, 1932-33 (I think it was the 6th in the series). One instant classic that I love is “The Church in the Wildwood”, which’ll have you burning the holy cross into your skin & awaiting the rapture by song’s end. I mean, if I heard this sort of genius in church maybe I wouldn’t be such a godless anti-theist. While this CD is as sweet and as timeless as any of their work, I truly get the sense that by the time the group had honed their formula & been popularly recognized as the top act in the nascent field of country music, they really started “phoning it in”, if you will. At least in terms of creating dynamic new material. No, a lot of this one draws upon ballads and spirituals that were floating around Appalachia since time immemorial, and often features the exact same strum and warble as a dozen other Carter Family numbers you’ve grown to love. That keeps me from an unqualified raving endorsement of this one by its lonesome, and only leads me to recommend it as part of the greater whole. Get the first 2 in the series if you can find them, or if you’re pinching pennies (and who isn’t), then the JSP box set will do you right.
posted by Jay H. at 4:31 PM