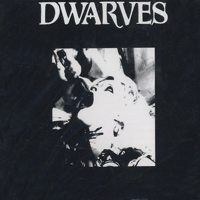 I was a “college radio” DJ when THE DWARVES’ “Horror Stories” LP came out in 1986, and like everything on the Voxx label at the time, it mostly went in one ear & out the other. I couldn’t believe how thinly those records were produced, and it was a couple years before I’d developed a true palate for 60s punk – so a lot of the nuances of the band’s covers went right over my head. For those of you that only know The Dwarves in their post-1988 incarnations, they were actually once a died-in-the-wool 60s throwback band, with paisley shirts, a farfisa organ, and a roughly 50/50 mix of covers to originals. This CD from a few years back collects that era, and then picks up the very beginning of their explosive shift to out-and-out feedback punk screech. That era – easily their best – is well documented on the “Toolin’ For Lucifer’s Crank” and “Free Cocaine” CDs. I remember how my ears flapped to the back of my head the first time I heard Example #1 of the “change” – a song called “Fuckhead” on a forgotten promo comp called “The Secret Team” (this roaring blast with Herculean levels of distortion is nothing like subsequent versions of the 30-second song – it’s the only one you’ll ever need). From that point on I started to pay attention. Recently I decided to step back to 1985-87, the era documented on this one, by purchasing the CD. Let’s discuss.

I guess the seeds for the band’s change to gonzoid punk act were planted in the “Lick It/Nothing” 45, which is a masterpiece and which is on here (sort of). It’s a different version of “Lick It” than on the 45; I think the original’s on one of the aforementioned comps. This CD actually comes off pretty great, as all the band’s bile and distorted obnoxiousness is intact, just as a slightly lower “volume”. Tracks like their cover of “I’m a Living Sickness” and “Oozle” are fantastic thuds of Neanderthal rock, bashed out by suburban beasts without opposable thumbs. And you know, before “Horror Stories”, which is on here in its entirety, the band were a Chicago-based act called THE SUBURBAN NIGHTMARE, and all their material’s on here too. That’s maybe not as great – lots of recorded in-joke gags, spoken bits, and halfway-decent 60s garage. The band was definitely a little “green” around the edges, going so low as to perform a non-ironic CLASH cover (ouch!). But doing a regression analysis over 34 tracks, you get a pretty smoothed-out quality line here that makes this one worthy of purchase. The early (late 80s) Dwarves were a special band who had a direct lineage to great panic-rock precedents like THE PAGANS, first-EP MORLOCKS, THE KEGGS and MURPHY & THE MOB, and this one’s good enough “bait” to help any Dwarves neophyte go deeper.
posted by Jay H. at 7:56 AM