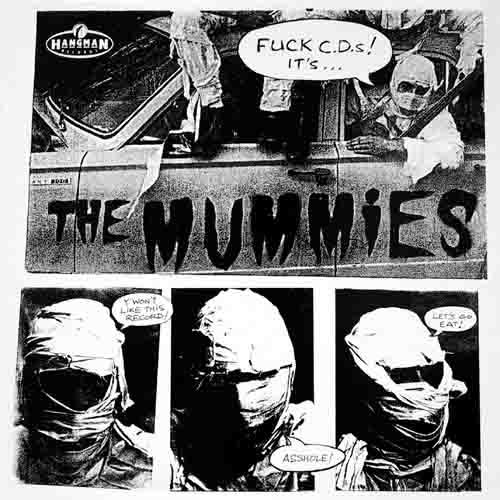 I moved to San Francisco in 1989 and quickly adopted four bands as the ones I’d rush out and see anytime they played: WORLD OF POOH (who soon broke up), THE DWARVES, THINKING FELLERS UNION LOCAL 282, and THE MUMMIES. Of the big four, I only still routinely listen to music from the first two – somehow the Thinking Fellers stuff, while interesting & convoluted & at times a total blast of Beefheartian glee, just never came off as wild on 45 and LP as they did on stage during their 1989-1993 heyday (though I once called an album of theirs a “masterpiece” in print around 1991, a move which I remember skeptically pondering the long-term consequences of, even as I was typing it). The Mummies, well, I must have seen every show in the greater Bay Area there for a few years – they were the most honest and raw bunch of 60s garage aficionados around, at a time when all sorts of second-wave 60s punk freaks were forming bands and blowing doors off the inferior 1980s move-coppers. At times, they howled like the everlovin’ Sonics howled, and even though they dressed up in costumes – almost always an inviolable, guilty-until-proven-innocent Crime Against Rock – every show was a total mess of sweat, beer and shattered eardrums. A 6-pints-a-night affair, if you know what I mean. Their cover picks were superlative , and they very consciously sounded like what we’d all imagine a band like LARRY AND THE BLUE NOTES sounded like live, unlike how they undoubtedly sounded for real in 1965 (tame teenybopper music for sock hops, with a little crazy distortion on the guitar, right?).

Why, I remember how “proud” I was when The Mummies’ first album (the one we’re discussing today) came out on Billy Childish’s Hangman label; I believe the deal was a direct outgrowth from a set they played opening for MUDHONEY and THEE HEADCOATS that was just aces.....Childish (who was already pretty beaned up at the time; I know because I tried to kiss his ass for a minute or two - “So great to have you in the United States, Mr. Childish”, etc. – only to get gibberish back) stood up front and positively glowed at the band, and all of a sudden, the nascent San Francisco garage punk scene was validated. Anyway, we got this LP out of the deal, the only real full-length The Mummies ever waxed, and it was all well and good in its day. But until I put it on again last week, I’d almost completely forgotten about it for a decade, and remembered not having spun it much at the time. Why not, you ask? Well, unlike other early 90s garage landmarks like SUPERCHARGER’s “Goes Way Out!”, THE GORIES’ “I Know You Fine, But How You Doin’” and the CHEATER SLICKS’ “Whiskey”, the Mummies stuff suffers from a sort of “tribute” mentality that suffuses the whole thing. Everything sounds like an updated 60s punk band or maybe 50s rockabilly/R&B act, with more raw oomph and a deliberately precipitous decline in fidelity, sure, but not much like a truly great band in its own right. I mean don’t get me wrong – some of this just smokes, like “Red Cobra #9” and “Your Ass (Is Next In Line)”, and there are a few stud instrumentals on here too that show off the band’s “chops” without a lot of showboating. But a lot of bands pulled off records like this around 1990-93, and while this might be better than most of ‘em, my enthusiasm has diminished with advancing age and years of distance between me and my live-music-three-times-a-week twenties. A fine band, love ‘em to death, but worthy of canonization? Come on.
posted by Jay H. at 9:02 AM