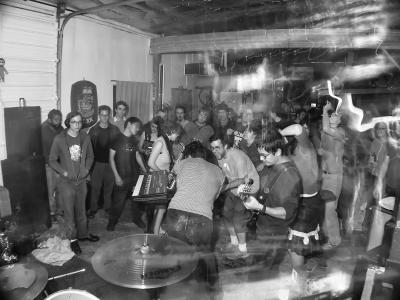 Los Angeles’ SILVER DAGGERS are part of a new breed of exploratory, pummeling agit-noise acts operating on the NOT NOT FUN label, and for my money, and based on the evidence, they’re the best of ‘em. This EP from last year is a strange mix of aggressive, guitar-heavy EX-style sturm und drang, and freeform honking and tooting. Since they’ve taken their name from an ELECTRIC EELS song, I’m sure you’re as curious as I was to know which era Eels they’re emulating. The early “Agitated”, “Cyclotron”, “Refrigerator” Eels? Or the later “Pleasure Boating”, “Spin Age Blasters” Eels? I’d have to go with the latter, given the jarring sax and clarinet all over this EP, and if there’s not a serious STYRENES fan in the band then I’ll be damned. The lead track “We Didn’t Pay” is a monster, and has got to be a nutbuster live for all of its 75 seconds of pound. This one in particular should win the band fans from those who refuse to believe that Amphetamine Reptile are no longer putting out records. Heads up on this bunch – I suspect they’re not done wowing us quite yet.
posted by Jay H. at 8:40 AM