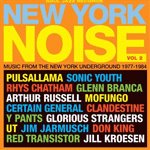 This burgeoning series of early 80s no-wave and weirdo dance/funk from New York City is a fine addition to the canon, and one that establishes stylistic connections between micro-genres you probably wouldn’t expect. For instance, even on “New York Noise 2”’s loudest and most scraping no-wave tracks, there’s almost always some thumping tribal percussion or rhythmic ass-shaking of some kind that slots in well with, say, the more pedestrian danceable stuff from PULSALLAMA or VORTEX OST. By virtue of the number of interlocking bands hitting stages at the time, that early “Downtown ‘81” scene in New York seems larger and more interesting than ever in retrospect -- though I’ll cop that I probably would have hated a lot of it had I been around the Eastern seaboard at the time (like “funky African” novelty act Pulsallama, for instance). This comp re-introduces some tracks that are absolutely essential to your life, the most monumental of which is the insane berserker “Not Bite” by Von Lmo & Rudolf Grey’s RED TRANSISTOR. This single track is no wave’s crowning moment in my eyes, more damaged and wild than anything the “No New York” bands & their peers cooked up, and a total rabid classic for the ages. Previously only available on a posthumous 45, it’s seriously worth picking the CD up for this one all by itself. (Though, in the digital age, you can probably find a download site to snag the track for 99 cents).

The other big winner is a track I wasn't familiar with before from RHYS CHATHAM called "Drastic Classicism". It is the ringing echo of metal careening wildly off the rails, the soundtrack for some imaginary video of a subway train plunging through a tunnel engulfed in flames. You know what I mean? At least that's what I see when I hear it. It's fantastic, and a call to action to check out his "work" from this era. A non-funky, tamer version of sounds found on this comp can be found in SONIC YOUTH's ethereal "I Dreamed I Dream", a track I'd truly forgotten was so great. Other good finds are MOFUNGO's avant-electrode rock "Hunter Gatherer", UT's searing "Sham Shack" (need to learn more about them as well, I'll just ask Tim Ellison) and surprise surprise, something from Jim Jarmusch I can actually stomach - his very of-the-era band the DEL-BYZANTINES and "My Hands are Yellow". Oh sure, there's some dogshit to be found - look no further than CLANDESTINE and FELIX for fourth-rate, warmed over limp disco -- and am I the only one who thinks "My Relationship" by the Glenn Branca's THE STATIC is so jaw-droppingly bad as to be unlistenable? Yeah, I probably am. I remain very impressed after enjoying "New York Noise 1" so much a few years ago, & given the obscurity of much of this jazz, I wonder if they can extend the magic into a third volume?
posted by Jay H. at 9:15 AM