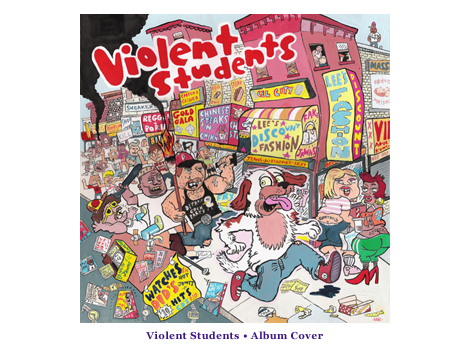 Sporting easily the worst cover art I’ve seen since MURPHY’S LAW’s “Back With A Bong”, this debut CD from Philadelphia’s VIOLENT STUDENTS is an odd one. On the one hand, it’s a beefy brew of solid-gold death dirge like a weirdo marriage of SKULLFLOWER and FLIPPER; on the other, it’s really unpotent and fairly unimaginative – making it a case of hearty intentions, flawed execution. Keeping with the sleeve’s awful drawings of rampaging, ejaculating punks, the “secret weapon” overlayed on top of the all-instrumental drone jamboree is this bizarre atonal grunting that’s omnipresent on every track. It’s as if the band sampled and mic’d every musclehead slamming his ass off in the pit @ the ’82 SS DECONTROL/JERRY’S KIDS/GROINOIDS show, and then looped the results back into the mix, Mission of Burma-style. This isn’t all bad, mind you – in fact it brings a man down to a very sweaty, primal place that we men sometimes forget to call “home”. But I suppose I’d be lying if I told you I wasn’t a little disappointed to hear something so uninspiring from PARTS UNKNOWN Records, the label that brought you the stunning PISSED JEANS. I know the Pissed Jeans, and you, sirs, are no Pissed Jeans!
posted by Jay H. at 7:52 AM