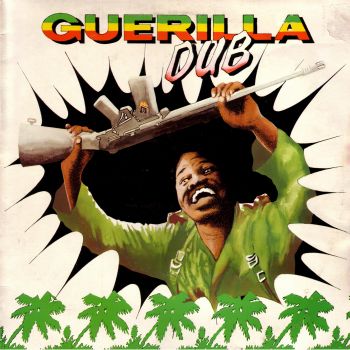 A rare dub LP that has yet to see the light of digitization, 1978’s “Guerilla Dub” has got some exceptionally deep, tuff dub sounds within its grooves. The opener, “Cuddoe Dub” is bombs-away, drop-out experimental dub, the kind that’s made me such a slathering fan of the form. Channels disappear, bass slithers quietly in the background, and then a huge KING TUBBY-produced shock of whipcrack sound rattles the eardrums before echoing into a million shards. Track #3, “Paul Bogle Dub” is just as killer – in fact these two tracks alone will infect any dub C-90 I make for pals in the years to come (making tapes – I’m gonna help bring it back). A few others are nearly up to that standard, others not so much, but when you get classic Jamaican 1970s backing acts like THE AGGROVATORS and THE REVOLUTIONARIES together for a dub throw-down, the results are bound to be at least halfway stellar. This one easily tops the “Aggrovators Meets The Revolutionaries At Channel One” CD, and I hope that at least a few of these ditties end up on a comp at a minimum.
posted by Jay H. at 8:42 AM