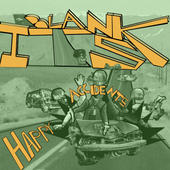 Got to hand it to Seattle’s BLANK-ITS, they’ve done a mind-meld on several different modern garage punk shoots & branches (classic ’77 punk, robotic CHROME-style noise squall, power pop and MONOSHOCK-esque spazz-out), and in process helped to invigorate and keep the sound wild and alive. Their debut CD “Happy Accidents” is great from top to bottom, and will clean your proverbial clock in roughly 20 minutes flat. I actually thought it was only “good” the first time through, but the more I rocked the house with it the more it stuck with me. Often one 2-minute marvel like “Road Rage” will bleed into the one after it with much feedback and spark-shooting fanfare, sort of like “TV As Eyes/Zombie Warfare” on Chrome’s third record......and the guy behind the mic on all these songs appears to be singing through some bizarre bullhorn/modulator that gives his voice an eerie, big-brother-ish quality. Other times the Blank-Its are more straightforward & bouncy, and even have a song called “Puppy Love” (ouch!). I didn’t particularly care for the fact that out of 9 brief tracks, three are “remakes” of the sole three songs they’ve already put out on 45s, but what are you going to do. It’s been three years since I saw this band play live when they were fragile & young – I’m itching to see the road show now that they’ve incorporated loads more out-and-out damage into their shtick. Meanwhile, this is one hot record and I urge you to give it a hearing.
posted by Jay H. at 9:27 AM