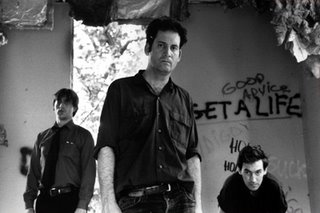 Calling this a “bootleg” is too generous, since I know of no format in which these recordings truly exist, outside of a tape that the CHEATER SLICKS’ label head was kind enough to make for me 12 years ago. Forgive me if I may be so bold, but I will go on record as stating that not only is this the finest set of recordings ever produced by the Cheater Slicks (by a mile – and this is one of the five great rock bands of the 1990s), but it’s potentially the hottest set of uncirculated rock music recordings I’ve ever heard. At least until someone takes up the cross and finds a way to digitize these & give them the proper release they’ve always deserved! Let me provide a bit of background, at least as I understand it. In 1994, In The Red received these from the band and were targeting a release of them as the follow-up to the previous year’s destroying “Whiskey” LP. At this point the band were bar-none the most raging and hard of the class of early 90s garage punk acts – and they were light years ahead of the pack, incorporating controlled feedback, feral drum bashing, a double-play of raw, throaty, vocalists, and a demented 60s psych approach that has started to creep in and lord over the sound like an unseen, angry hand. When I heard the demos for what would (sort of) later become the “Don’t Like You” album, I was floored, and couldn’t believe they’d topped “Whiskey”, which was a near-masterpiece. This was the track listing for said tape:

I played the magnetic backing off the thing, and was ready for the band’s dominance at the top of the rabid punk/psych/puke food chain, where they belonged. Unfortunately, and I could be telling this wrong so let me know, but the band got it in their head that their best set of songs ever could be improved by bringing non-producer – and then indie rock star – JON SPENCER into the studio to re-work and “produce” the album. The thinking was with the Spencer “brand” on the band, the better the chance to shift a few units and unearth a few new fans. I can’t argue with the logic, but I’ve been arguing with the results for years. Sure, what eventually emerged as “Don’t Like You” was a hotshit record, but I was so let down by how much they’d jettisoned – and how songs that had soared were now mucked up with tons of aural garbage & atonally weird bits that added zilch to the sound – that I refrained from playing it much after the first spin the month it came out. I was seriously bummed, as we say in California. I hated the one with Jon Spencer intoning in that dumb Elvis voice of his about the band over a moronic slow riff – a complete waste of LP space that would have been far better served by including the ear-destroying original version of “Sadie Mae”, for instance.

2 tracks from the sessions that produced the tapes did come out, eventually, as a 45 – the “Walk Up The Street / Wedding Song” single on In The Red. If you’re a Cheater Slicks fan, and I know you are, then you’ll probably agree that this is finest single in their outstanding discography. I will also say that I saw the band live on this tour twice, and they were nothing short of incredible, but I still pine for this tape to come out and bring an entire generation to its knees, 12 long years after it should have. Of all of the 20th Century's many crimes (the gulag, the Great Leap Forward, Rwanda and all that), this is the one that personally hurt me the most.
posted by Jay H. at 8:22 AM