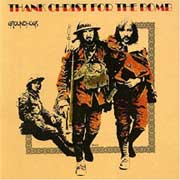 I guess THE GROUNDHOGS, a heavy 1960s-70s UK stun-blues act still recording & playing under that name today, have been out there all along, waiting for me & you to get wise to them. Me, I didn’t get there until I heard this 1970 LP, their third, called “Thank Christ For The Bomb”, which is revelatory in its fluid, ear-ringing heaviness. I would have to lump these guys in with similarly bent, blues-influenced characters of the era like the HAMPTON GREASE BAND and the PINK FAIRIES, but the Groundhogs also have elements of the MC5’s explosive power when Tony McPhee fires up his axe and lays it down for a minute or two. Seriously, some of the best “solos” I’ve spun on the hi-fi in a while. “Strange Town” and “Soldier” and two of the hottest rock songs of their time, and given how strong & clear the vocals are and the fact that this is accessible enough to have been huge – well, wouldn’t you have thought these guys would have been at least half as world-renown as friggin’ LED ZEPPELIN? There’s something about “the British blues” of the 60s and early 70s that is just so inherently awful to me that if I’d believed the press I’m seeing online in digging up information on this band, I’d probably have avoided this without fail. Thankfully a few online scribes recently threw educated props the Groundhogs’ way & got me to take a peek, and I love what I’m hearing. So where does one travel to next in the band’s rich tapestry of recordings?
posted by Jay H. at 10:00 AM