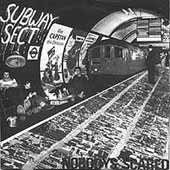 This is one of the comprehensive, homemade CD-Rs that used to be peddled on Paul Marko’s UK PUNK ’77 site until that part of the program went dark. I can only assume a CUBAN HEEL or a FRUIT-EATING BEAR took offense and dialed Scotland Yard. Marko had a great collection of pretty much every UK 1977-78 punk band’s demos, raw live recordings and of course legit stuff, and put together some real CD-R doozies. Unprofessional and mislabled at times, they still dug up stuff that no one else had before. I bought this SUBWAY SECT one around 2000 as a huge fan of their only well-known song “Ambition”, which makes an appearance in different guises on this thing three separate times. The Sect were led by a fella named Vic Godard, who is one of those figures who was lionized by the English music press for reasons that aren’t entirely clear. It has seemed for years that all it takes to impress the music journalists in the UK is to talk loudly, write “poetically”, and declare whatever it is you’re doing as the vanguard of a musical revolution. Godard was a star at this sort of pracing, poseur-like posturing, and better still, the press loved it when he flamboyantly "renounced" punk early on, right when it was just getting in big with the hoi polloi. His stuff while he was still a borderline punk, though, was pretty good. The two 1978 45s, “Nobody’s Scared / Don’t Split It” and “Ambition / A Different Story”, are punk in spirit and energy, but move at mid-tempo to its own sort of primal pub rock, nearly glam-like motor. I can imagine that some “gob” must have greeted some of these challenging songs in particularly rough locales in those heady days. “Chain Smoking” and a live track called “Why Don’t You Shoot Me” are especially good, and are full of random shouts and razor-sharp guitar – in fact the guitarist in this band’s early lineup was just deadly. I tip my John Courage to him. At the end of the day, though, I’m left with “Ambition” as Subway Sect’s only lights-out song, a classic weird keyboard-driven noodler that’s heavier than heavy. I would have probably loved them at the time if they were playing my pub, but today they’re not much more than a footnote. Don’t you think?
posted by Jay H. at 9:11 AM