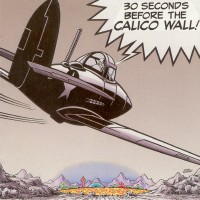 I guess I'm still searching for another definitive balls-to-the-wall knockout monster 60s psych comp -- "Psychedelic Disaster Whirl" is the only one I've hunted down -- but this one'll do for now. "30 Seconds Before The Calico Wall!" , which came out on Arf Arf Records on CD in 1996, has got three lethal heavies I've never heard before, and they're all being queued up for my own definitive homemade CD-R compiling the form. HAYMARKET RIOT perform a smoking garage number loaded w/ fuzz called "Trip On Out", and it's a whopper -- the whole comp is filled with hippie drug freak titles like "Apothecary Dream" & "Light The Glass Candle". Another killer is the v. heavy choogler "Of Dreams" by MORGAN, which reminds me a little of a glass-eyed version of SHARON TANDY & FLEUR DE LYS' "Hold On", with sulty female vocals and all. My final killer is the wildest feedback-laden snorter on here, "He's Comin' Part II" by MAGIC SWIRLING SHIP. You gotta figure as spaced-out and expansive as the guitar histrionics on this one were, Part I was probably just the simple A-side lead-in to the explosion on the flip. Real, real nice. Nothing else totally disappoints nor lights the glass candle of enlightenment, but I figure that as psych comps go, this one probably blew a couple of collector minds ten years ago. I was just too busy hiding from those sorts of folks at the time to notice.
posted by Jay H. at 7:55 AM