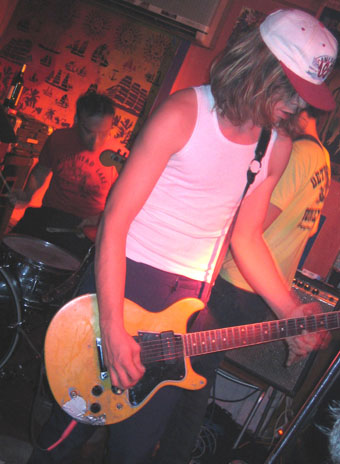 Yeah, it’s been a few weeks since this event took place, but I guess I just needed to let it marinate a bit & clear out some mojo before sharing with you. A few weeks ago San Francisco’s HEMLOCK TAVERN had one of their “Coalition of Aging Rockers” specials, shows that cater to the 30-and-up crowd and which start around dinnertime & end around 9-something. Just my style. A couple of beers (careful, not too many now, fatty!!), free earplugs, back in front of the TV by 9:30 – love it. Except it didn’t work out that way. First up were Montreal’s DEMON’S CLAWS, who’ve just released their second record on the fine HOOK OR CROOK label. I’d heard a couple mp3s from these trash/blues partyers, but live they were even better – like a punk-tempo BOOKER T & THE MGs with the farfisa cranked way up, with maybe a little bit of stumbling countrified GIBSON BROS action in the mix as well. Way more “R&B” than their recorded stuff, perhaps indicative of a new direction – one that’s obviously a winning career move, as they’ve just been snapped up by In The Red for their next record. I liked ‘em. BBQ is the one and the same BBQ from “The King Khan and BBQ Show”, whose excellent 2005 record we reviewed right here. He’s a one-man drummer/guitarist/singer extraordinaire, with a great ear for a gutbucket garage tune. He came out from Montreal with the Demon’s Claws guys and fit right in with a real nice set of bouncy, greasy, dirty white man’s soul. I kinda figured there was another fella hiding underneath the drums with an extra guitar, but since there wasn’t, I decided that BBQ was truly the real deal. He did this thing on almost every song where he’d slow the tempo down abruptly, like he was about to go into a medley or something, getting you all hopped up for some new song, and then boom – right back into the one he was playing. What a nut!

Left the club to get a burrito and came back to say some goodbyes, only to find the Demon’s Claws’ bass player standing on top of his van, blatantly "dangling his participle", if you know what I mean, & barking at the top of lungs in French (or “French-Canadian”) as everyone cracked up on the ground below – somehow in the moment got talked into following these wahoos and a few friends to the Parkside club, where both bands were going to play again at a super-secret, cobbled together “night show”. A night show!?! But I’m 38 years old..... I went anyway, and it was clear from the start that Demon’s Claws were going to make this day their big-time alcoholiday. Yelling, breaking things, fake fistfights, stumbling all over each others’ feet – sure, you could say it was kids being kids (whippersnappers!), but I like my drunks funny & charming, not annoying & dull. You ever get the feeling that some folks are trying & create a wild, unhinged atmosphere for everyone else while drinking, and are just spectacularly bad at it? That’s these guys. Good thing their music’s right-on. I half-watched two opening bands, one that dressed like The Kinks circa 1966 & who were OK & and another from Olympia called THE OLD HAUNTS (loud and hard slop-metal that ground my ears into a pleasing pulp), and then pulled my often-imitated, never-duplicated disappearing act. Word from my correspondents still left in the club was that Demon’s Claws barely even hit the stage, they just got up there and threw things at each other & jumped into the crowd without actually plugging in. That must have been hilarious! Now where’s my Metamucil?
posted by Jay H. at 8:54 AM