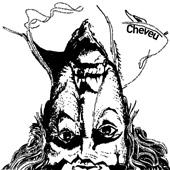 When a modern band gets some attention from both S-S and Polly Maggoo Records, it’s a pretty sure bet that they’re something special. I think the S-S record by France’s CHEVEU reviewed in April here was a fantastic blast of electrospasm punk & this one’s easily as good. “Superhero” has a murderous 007/Batman riff & bunch of super-agitated talking and fumbling, with odd squeaks and keytones throughout. It’s a devastating song for playing late, late at night, and Exhibit A for those who don’t believe that a whole new strain of strange punk music has been invented these past couple years. “Clara Venus” is like a frantically uptempo Cabaret Voltaire & only lessens the pulse by a whisker. Wow. One of the best 45s of 2006, I don’t care that it’s June 5th, it’s gonna be on the list!
posted by Jay H. at 9:01 AM